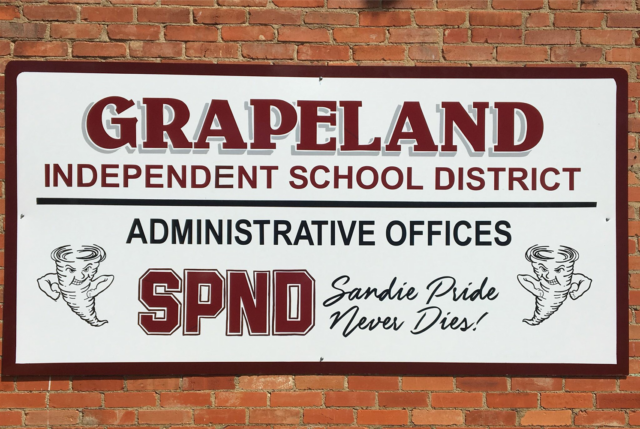 GRAPELAND – The Grapeland Independent School District Board of Trustees met in a regularly scheduled meeting on Thursday, March 25 highlighted by an update on facility improvement initiatives.

GISD Superintendent Don Jackson reported several projects are in the works around the district. He reported a drawing of the layout for relocation of the Transportation Building was in the drafting stages.

He added Mike Richmond had started the irrigation of the Grapeland Elementary School grounds and further indicated the water well shed had recently been completed.

In addition, Jackson reported work on the roofs of the old gym and auditorium had been completed by Lucas Roofing – who promised to return and paint the unit on top of the gym.

Concerning the Lorena Shoultz Auditorium, the superintendent indicated Platt Heating and Air had completed installation of new AC Units on the roof. As part of the auditorium renovations, the chairs have been removed and are for sale on the district’s social media pages. Jackson also commented he had spoken with Nathan Childress about a scheduled meeting next week to discuss lighting options in the auditorium.

It was also reported the Spanish Building ceiling had been cleaned out and Gary Graham had completed the rails for the steps in between the Elementary School and the Early Learning Center.

Prior to the facilities report, the superintendent provided a breakdown of the district enrollment so far during the 2020-2021 school year.

Jackson reported there were 602 students currently enrolled in GISD and added 667 students have transitioned through the district so far this year.

At the high school, he said there were 171 students currently enrolled with 185 students who have transitioned through the campus. At the ninth-grade level there are currently 43 students while in the tenth-grade there are 42. There are also 52 juniors and 34 seniors.

As the meeting continued, Jackson brought forward a proposal on employee stipends. He proposed if an employee was to notify the district of their intention to retire or resign on or before April 5, they would receive $500. He explained this would allow the district time to find someone to replace the retiring/resigning employee before the 2021-2022 school year began.

Also, on the stipend front, Jackson proposed an increase and expansion of the High Need Stipend from its current rate of $2,100 to $3,000.00.

Jackson provided two reasons why he felt this might be the best route for the district to take. They were:

“An increase and expansion of the High Need Stipend would allow us leverage and incentive to retain and recruit quality teachers. Presently we pay out $14,700 in High Need Stipends. The amount in salary increase would be $41,300. The amount of the Retention Stipend last year was $46,800,” he informed the board.

A motion was made seconded and unanimously approved to move forward with the retention stipend proposal.

The next regular meeting of the GISD Board of Trustees has tentatively been scheduled for Monday, April 19 at 6 pm.