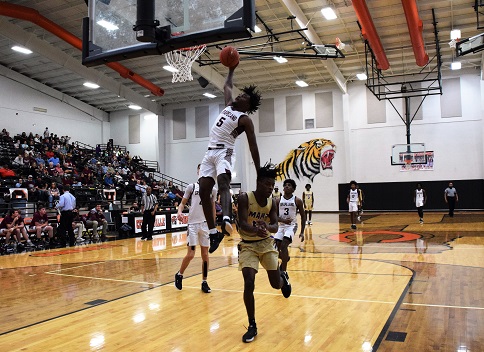 CENTERVILLE – The road to San Antonio meandered through Centerville on Wednesday night as the Grapeland Sandies traveled to the home of the Tigers for an Area Championship matchup with the Mart Panthers.

The Sandies and Panthers are no strangers to one another as Mart knocked Grapeland out of the football playoffs in 2019 and in 2018 on their way to back-to-back state championships. The Panthers were in a different classification in 2017 and claimed the title that year as well.

It has been said Mart plays one sport and regardless of the shape of the ball, that sport is football. And while the Panthers are very good on the gridiron, that doesn’t always transfer to the hardwood.

The Sandies, on the other hand, have excelled in football the past several years and have continued to be a dominant program in basketball.

In Wednesday night’s contest, it appeared as if Mart wanted to exorcise some demons from their title game loss in this year’s playoffs as the Panthers tried to rough up the Sandies with their physical style of play.

It didn’t work, however, as Grapeland gave as good as they got on their way to a 71-44 blowout win. The victory helped extract a measure of revenge from years past and also punched the Sandies ticket to the Regional Quarterfinals.

Once the game began, the Panthers didn’t have an answer for Cadarian Wiley in the paint. Mart also seemed to forget about Michael Dancer who kept the Panthers from collapsing inside on Wiley.

Wiley dropped in six while Dancer added four in the first eight minutes of play. Keizion Ashford, BJ Lamb and Omarian Wiley all had two apiece while Riley Murchison made one of two from the line to help the Sandies take a 17-11 lead after one.

Mart was paced by Averion Johnson with five points and Roddrell Freeman with four. Klyderion Campbell closed out the Panthers’ first quarter scoring with two.

As the second quarter got underway, the Grapeland defense tightened up. On Mart’s first possession of the period, the Sandies forced a five second violation and then held the Panthers to eight total points in the period.

The defense jump started the Grapeland offense as the Sandies opened up a 24-point lead by the end of the first half.

C. Wiley continued to dominate inside as he poured in 11 second quarter points. Ashford began to heat up with six while Dancer dropped in another four. Lamb converted three of four from the line and Murchison chipped in a basket to help the Sandies take a 43-19 lead into the locker room at the half.

The Panthers’ second quarter scoring came from four players – Campbell, Freeman, Johnson and Ty Sanchez – who all had two apiece.

Even after halftime adjustments, Mart was still unable to contain C. Wiley who burned the Panthers for another six points in the third. Ashford, Lamb and O. Wiley divided up the other six Grapeland points in the period as the Sandies extended their advantage to 55-29 with three in the books.

Freeman tried to keep Mart in the game with five while Johnson added four. Ayden Lane made one of two from the line to close out the Panthers’ third quarter scoring.

With a 26-point lead, the Sandies knew the game was in hand and pulled the starters with three minutes left in the contest. Still, before the reserve players came in, Lamb netted seven. Four other Grapeland – Dancer, Murchison, C. Wiley and O. Wiley – all had two apiece. Ashford and Lekerian Smith both made one of two from the charity stripe as the Sandies waltzed to a 71-44 win.

On the game, Mart was led in scoring by Roddrell Freeman with 15 points and Averion Johnson with 13. Klyderion Campbell had nine while Ty Sanchez added two and Ayden Lane chipped in one to round out the Panthers’ scoring.

The Sandies were led by Cadarian Wiley who had a game-high 25 points. He also pulled down nine rebounds, dished out two dimes and had four steals. BJ Lamb also had a solid game with 14 points and five boards. In addition, he had four assists and six steals.

Keizion Ashford was also in double figures with 11 points as well as six assists and six steals. Michael Dancer dropped in 10 points while he grabbed five rebounds to go along with two assists and five steals.

The win set-up a showdown between the #1 ranked Martin’s Mill Mustangs and the #3 ranked Sandies on Saturday, Feb. 27 in Frankston. As of press time, however, a final score was unavailable.