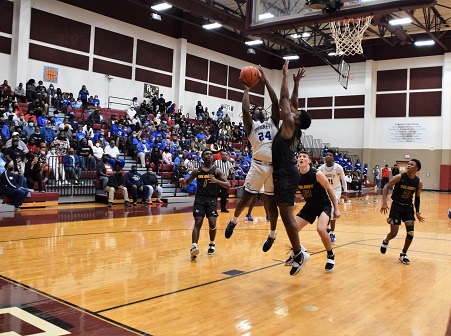 PALESTINE – The cardiac kids from Crockett were back in action on Thursday night as they traveled to Palestine to take on the #8 ranked Malakoff Tigers in the Area Championship.

Crockett had won their Bi-District matchup with the Rogers Eagles on Tuesday on a put back with six seconds to go. While Thursday night’s contest wasn’t settled on a last second shot, it was just as thrilling as the Bulldogs held off a furious rally by the Tigers to escape with a 60-57 win and advance to the Regional Quarterfinals.

As the game got underway, both teams struggled from the field. Whether it was defense or nerves, the Tigers simply couldn’t buy a basket as they only scored five points in the first quarter on twos from Jaylon Mosley and Darion Peace along with a free throw frow Klayton Copeland.

The Bulldogs also struggled from the field but the Tigers helped them out with quite a few turnovers leading to easy points. DJ Walker led the way for Crockett with five first quarter points while Ty White added four. Courtney Byrd, Jayden Collins and Chris Purvis all had two apiece as the Dawgs took a 15-5 lead after the first eight minutes of the game.

The second quarter saw Malakoff’s offense begin to get going as they whittled away at the Crockett lead. Just when the Tigers seemed poised to strike, however, the Bulldogs would shut them down.

Mosley added five more to his total while Peace and Karter Fuller both had two. Quintin Fulton and Nathan Jones added one apiece to bring the Malakoff first half scoring to a close.

Byrd kept the Tigers at bay as he scored six points in the paint and one at the line during the second quarter. Walker had four while Purvis made one of two from the charity stripe to help Crockett take a 27-16 lead into the locker room at halftime.

Following the break, the Tigers showed a sense of urgency as they scored the first five points of the third to cut the lead to 27-21. The Bulldogs responded with a five-point run of their own but Malakoff came right back to close the gap to six.

The Tigers cut the lead to two with under two minutes left in the third, but the Bulldogs managed to make it out of the quarter with a 44-41 lead.

Copeland led the charge for Malakoff with nine third quarter points. Jones added seven while both Fuller and Mosley had five apiece to round out the Tiger scoring in the period.

Collins came alive for the Bulldogs with eight points in the third. Keshun Easterling added four, White had three and Jalyne Carruthers chipped in a basket as Crockett clung to a three-point lead after three periods were in the books.

As the final eight minutes of the game began, the two teams slugged it out like a pair of prize fighters as the Tigers and Bulldogs squared off in the middle of the ring and traded blows. Malakoff would score and then Crockett would answer right back.

Crockett took a four-point lead at the six-minute mark and when White hit a three with under five remaining it seemed Malakoff was on the ropes.

It seemed even more so when Fuller was called for his fifth foul and then drew a technical as he was leaving the court. The tech sent White to the line where he nailed three-of-four to push the Crockett lead out to 55-43 with 3:43 seconds remaining in the game.

Malakoff wouldn’t go quietly, however. The Tigers trimmed the lead to 59-52 with under a minute left in the game and got the margin down to six with less than 30 seconds remaining. An errant inbounds pass from the Bulldogs allowed Malakoff to cut the lead to four with 11 seconds remaining and then to three following a free throw.

The Bulldogs managed to get the ball across the time line on the inbounds but lost possession with 3.4 seconds left on the game clock. With one last chance, the Tigers threw a court-length pass that was caught. In the process, however, the Malakoff player stepped on the line, giving Crockett the ball back and allowing them to run out the clock.

On the game, Nathan Jones led the Tigers in scoring with 16 points while Jaylen Mosley had 14. Klayton Copeland had 13, Karter Fuller dropped in seven, Darion Peace had six and Quintin Fulton chipped in one to round out the Malakoff scoring.

The Bulldogs were paced by Ty White with 16 points and DJ Walker with 11. Jayden Collins was also in double figures with 10 while Courtney Byrd had nine. Chris Purvis powered his way to six, Keshun Easterling added four while both Jalyne Carruthers and Tayshawn Simon had two apiece to account for the Crockett point production.

The win moved Crockett into the Regional Quarterfinals against the Lorena Leopards on Saturday but as of press time a final score was unavailable.