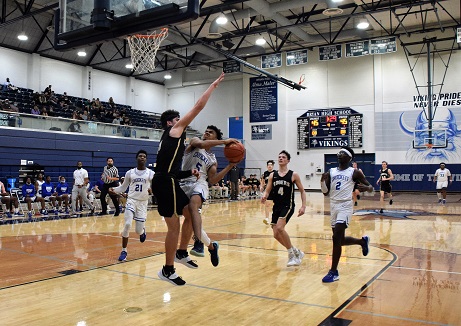 BRYAN – With the score tied at 47 and less than a minute left in the Bi-District Championship, the Crockett Bulldogs opted to play for a final shot. They had battled the Rogers Eagles to a standstill after looking like they might get blown out in the first quarter.

Jalyne Carruthers brought the ball up court and worked the clock down to less than 15 seconds. Carruthers had given the Bulldogs the lead seconds earlier when he hit a driving lay-up to put Crockett ahead, 47-45.

The Eagles responded with a basket of their own to tie things up, setting the stage for the dramatic finale.

Carruthers passed the ball to the top of the key and a shot went up. The ball clanged off the rim, but Crockett’s Jayden Collins swooped in to snare the rebound. With Rogers defenders draped all over him, Collins went up strong and softly laid the ball over the front of the rim to give the Bulldogs a 49-47 lead with six seconds left in the game.

Rogers inbounded the ball but the Bulldogs’ defense denied the Eagles’ a chance to get off a desperation shot attempt as Crockett held on to win by a final score of 49-47.

Even though the Bulldogs pulled it out in the end, it certainly looked like they were going to be one-and-done as the Crockett postseason got underway. Early turnovers and sloppy play by the Bulldogs allowed Rogers to open the first quarter on an 8-0 run.

A time out did not help much as Crockett didn’t score its first points of the game until Courtney Byrd worked inside for two at the 1:40 mark. DJ Walker added the only other bucket for the Bulldogs as they found themselves staring up at a 14-4 deficit after the first eight minutes if the game.

The Eagles, on the other hand, seemed to have Crockett’s number as they opened up a 10-point lead in the early going. Ben Hutka dropped in six to lead Rogers’ first quarter scoring attack while four other Eagles – Riley Dolgener, Payton Mills, Kade Sebek and Ty Sebek – all had two apiece.

While the first quarter belonged to Rogers, the second quarter belonged to Crockett. The Bulldogs whittled down the 10-point deficit to four with 5:28 left in the quarter and cut it to one with 1:27 remaining in the half. A halftime buzzer-beater by Keshun Easterling gave Crockett its first lead of the game as they took a 20-19 lead into the locker room.

Walker led the way for the Bulldogs in the second quarter with seven points. Carruthers, Easterling, Chris Purvis and Tayshwn Simon all had two points apiece while Ty White made one of two from the line to close out the first half scoring.

The Eagles’ points in the second quarter came from Hutka with three and T. Sebek with two.

After the break, the two teams played about as evenly as they could with the Bulldogs scoring one more point in the third period than the Eagles. Both teams opened the second half by knocking down three-pointers and with 4:27 left in the third quarter the score was tied at 25.

The Bulldogs managed to open a three-point lead with 1:22 left in the period and then pushed it to five on a pair of free throws by Collins. A long ball from K. Sebek, however, cut the Crockett advantage to 34-32 and sent the game into the final period of play.

Crockett’s third quarter points came from Collins with seven. Carruthers knocked a three while both Purvis and White netted two each.

The Eagles’ third quarter points came from Hutka and K. Sebek with six apiece while T. Sebek hit one of two from the charity stripe.

The fourth quarter was a back-and-forth affair. Rogers tied the game and then took the lead by one with 6:22 left in the contest. Byrd helped Crockett reclaim the lead when he converted a three-point play at the 6:02 mark, but Rogers tied things up – once again – with 5:16 remaining.

A three-point play from White gave Crockett a 40-37 lead at 4:45, however, a three-pointer from the Eagles’ Zach Davis knotted things up at 40.

The two teams swapped baskets and with 2:13, the game was tied at 45. Carruthers hit a lay-up to give Crockett a two-point advantage but, as previously mentioned, the Eagles wouldn’t go away. Finally, Collins was able to pull the game out for the Bulldogs with his heroics as Crockett escaped with the 49-47 victory.

On the game the Eagles were led by Ben Hutka with a game-high 15 points. Kade Sebek was also in double-figures with 11 while Ty Sebek netted nine. Riley Dolgener had four while both Jaxon Craig and Zach Davis had three apiece. Payton Mills closed out the Rogers’ scoring with two.

Crockett was led by Jayden Collins with 12 points while DJ Walker went for nine. Jalyne Carruthers dropped in seven while both Chris Purvis and Ty White had six apiece. Courtney Byrd added five while Keshun Easterling and Tayshawn Simon had two apiece to close out the Bulldogs’ point production.

The win moved the Bulldogs into the Area Championship against the Malakoff Tigers on Thursday, Feb. 25, which is covered in another article in this edition of The Messenger.

Sandiettes Run past 4A Lady Lions, 76-53
Home at the Dome
Elkhart Lady Elks Out Lift Competition in Malakoff