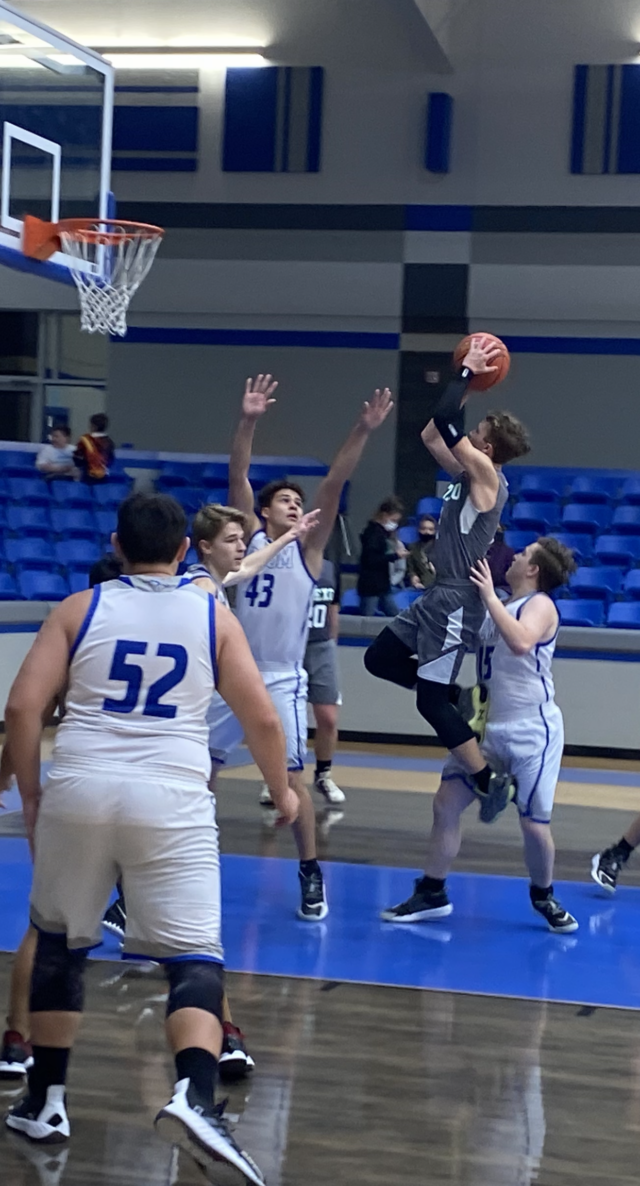 SLOCUM – Don’t look now, but the Latexo Tigers are in first place in District 20-2A. Yes, it’s still very early in the season and yes, they are tied with the Grapeland Sandies for the lead, but still, it has been an awfully long time since the Latexo faithful have been able to say they’re in first.

The Tigers took another step towards the playoffs on Friday night as they traveled to Slocum to take on the Mustangs. Slocum is always tough at home, but the Tigers used a strong first half to hold off the Mustangs as they picked up the 57-39 win.

Latexo came out of the locker room determined to make Slocum guard the three-point shot as Sam Jones drained a pair from behind the arc to go along with two free throws. Logan Ray also hit from downtown which allowed Jack Crow, Eli Filer and Malachi Reece to slip inside for two points apiece as the Tigers opened up a 17-11 lead after the first eight minutes of play.

The Mustangs stayed within shouting distance as Jose Molina dropped in five points and Lincoln Smith hit a three-pointer. Lex Rich added two from the perimeter while Zach Bennett was one of two from the line to round out Slocum’s first quarter scoring.

As the second quarter began, the Latexo three-point barrage cooled down but it kept the Slocum defenders on their toes. Filer led the way for Latexo with seven points in the period while Logan Ray began to heat up with six. Tyler Lumbreraz broke into the scoring column with five and Sam Jones nailed his third, three-pointer of the game to help the Tigers take a 38-20 lead into the locker room at halftime.

Slocum’s shooting woes from the first quarter spilled over into the second as they only scored nine in the period. Ryan LaRoche connected from three-point land while Ronnie Bynum, Charlie Cox and Jesse Pierce all had two apiece to bring the first half scoring to a close.

After the break, the Tigers went ice-cold from the field as they only scored five points in the third quarter on four from Jones and one from Lumbreraz.

This allowed the Mustangs to trim the lead down to 43-30 by the end of the third quarter. Bennett put in four points while both LaRoche and Rich knocked down three-pointers to help Slocum start to mount a comeback attempt.

The comeback never materialized, however, as Ray took over in the final period of play for Latexo and poured in eight points. Filer, Lumbreraz and Jacob Saxon all chipped in two apiece as the Tigers picked up the 57-39 road win.

On the game, the Mustangs were led in scoring by Ryan LaRoche with nine points. Lex Rich netted seven while both Zach Bennett and Lincoln Smith had six. Jose Molina added five while three other Slocum players – Ronnie Bynum, Charlie Cox and Jesse Pierce – all had two apiece to close out the Mustangs’ point production.

The Tigers were led by Logan Ray with a game-high 17 points and Sam Jones with 15. Eli Filer was also in double-figures with 11 while Tyler Lumbreraz added eight. Jack Crow, Malachi Reece and Jacob Saxon all had two each to account for the Latexo scoring.