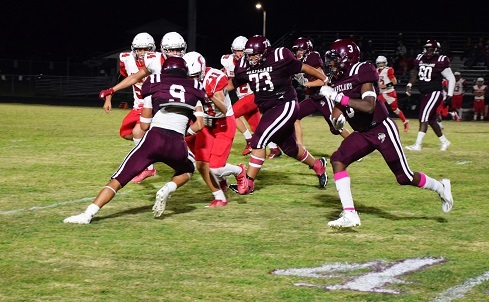 GRAPELAND – Talk about a brutal start to district play! The Grapeland Sandies opened District 11-2A DI competition on the road against the Alto Yellow Jackets and then returned home this week to take on the Groveton Indians, two of the most storied programs in East Texas high school football.

Not to take away anything from the Sandies, but fortunately both the Alto and Groveton programs are a little down this year. Grapeland took care of business against Alto last week and this week they survived a first half shootout with Groveton before they pulled away to win by a final score of 54-36.

The action was fast and furious in the opening minutes of the game. The Indians won the toss and elected to defer until the second half. The Sandies were more than happy to start on offense and after the kick, Grapeland opened up shop on their own 25.

Following back-to back completions, Grapeland QB BJ Lamb tried was picked off by Groveton’s Dylan Wells who returned the ball 27 yards for a pick-six. Trenton Torregrossa knocked home the extra point and with less than two minutes gone in the first quarter, the Indians led 7-0.

The Groveton lead didn’t last long, however. Once again, the Sandies opened their possession on the 25. A penalty before the first down snap pushed them back five yards and on the next play, Cadarian Wiley only managed to pick up a yard.

On second down, however, Grapeland showed why they are such a dangerous team. Wiley took the hand-off and started to go up the middle. The running lanes were clogged, so he bounced outside towards the Groveton sideline. Wiley saw an alley, turned on the after-burners and raced 79 yards – untouched – into the end zone.

Lekerian Smith bulled his way over the goal line for the two-point conversion and with 9:08 still left in the first quarter, the Sandies led 8-7.

Groveton’s next possession ended with a punt and Grapeland took over at their own 20. Wiley picked up 11 yards on first down and followed up with 16 more on the next play. Smith churned out two yards and then Lamb connected with Keizion Ashford for 10 yards to move the Sandies across the midfield stripe.

Smith picked up four on first down and on second down, Lamb kept the ball around left end, juked one defender and then scampered 41 yards for a TD to extend the Grapeland lead to 14-7 with 4:32 left in the opening quarter.

The Indians showed they were not going to back down as they cut the Grapeland lead to one on their next possession.

Starting their next possession on their own 46, Wells, who also played QB for Groveton, connected with Torregrossa for 41 yards to move the Indians into the Sandies’ red zone. On the next play, Wells and Torregrossa hooked up for eight more to bring the ball down to the five-yard line. King Jones picked up two and then lost two yards. With the ball back at the five, Wells kept it himself and slipped into the end zone to make the score 14-13 with just over three minutes left to play in the first quarter.

The first period scoring wasn’t finished, however. After a touchback, the Sandies began their next possession on the 25. Wiley gained good yardage on first down, but a holding call moved the ball back to the 36.

It seems to happen at least once a game. On Grapeland’s next play from scrimmage, Riley Murchison got behind the defense and Lamb found him on a 56-yard bomb to set up the Sandies at the Indians’ eight-yard line.

After an illegal procedure penalty pushed Grapeland back to the 13, Lamb took matters into his own hands, kept the ball and slipped into the end zone on a third-and goal to put Grapeland up 20-13 with 44 seconds left in the first.

As the second quarter opened, the Sandies defense stiffened. Wells picked up six on first down from the Groveton 39 but was sacked on second down for an eight-yard loss. Torregrossa gained five of it back, but the Indians decided to punt.

The Sandies took over on their own 22 and on first down Wiley slashed his way for 23 yards and a first down at the Grapeland 45. The drive stalled at the 49-yard line and the Sandies were forced into a punting situation.

In a play eerily similar to one from last week’s game against Alto, the snap was high and Ashford had to climb the ladder to catch the ball. When he landed, Groveton defenders were on top of him, so Ashford sprinted to his right and worked his way up the field for seven yards and a first down.

Stop me if you’ve heard this before, but on the next play from scrimmage, Wiley took a handoff and it looked like he was shot out of a cannon as he blazed by the Groveton defense for a 45-yard touchdown to make the score Grapeland 26 and Groveton 13.

The Indians kept coming, however. Groveton started their next possession on their own 31. After an initial first down, Wells connected with Elijah Jefferson for 48 yards to move inside the Grapeland 10.

The Grapeland defense rose up and kept the Indians out of the end zone as they stopped them on fourth down at the two-yard line. Unfortunately, on the next play, Wiley was thrown for a loss in the backfield and Groveton was awarded a safety.

The safety also meant Groveton got the ball back and started inside the Sandies’ 40. On first down, Torregrossa took a pitch, found a seam in the Grapeland D and galloped his way into the end zone for a 38-yard TD. The extra point was good and with 4:01 left in the first half, the Indians now only trailed by four, 26-22.

On the ensuing kickoff, Groveton made a mistake. After several touchbacks, the Indians decided it would be a good idea to kick the ball to Lamb who fielded it at his own 13-yard line. Lamb gave a little stutter step to assess where the weak spot in the kick coverage. The way he read the field, it appeared as if Lamb was playing chess while the Indians were playing checkers as he exploded past the kickoff coverage for an 87-yard return for a TD.

Groveton would answer right back. Starting at their own 37, Wells found Zackary Fisher for 12 to move the ball to the 49. On the next play, Wells was sacked by Colton Franklin for a loss of one. After an incompletion, Wells and Torregrossa hooked up on a 48-yard completion down to the four-yard line of Grapeland.

On the play, however, both Torregrossa and Lamb were dinged up, which would play a major role in the second half. Wells scored on the next snap but the PAT was no good and the Sandies took a 33-28 lead into the locker room at halftime.

Following the break, the two teams exchanged punts but just when it seemed as if the momentum had swung to the Groveton side, Michael Dancer made a spectacular one-handed interception on a Wells pass.

With the game still very much in doubt, the Sandies began to drive. Ashford picked up seven on first down and then Wiley ripped off 14 yards on third-and-four to move the ball onto Groveton’s side of the field.

After Lamb only managed to pick up three yards on two carries, Grapeland tried a direct snap to Wiley. The play worked like a charm as Wiley burst up the middle of the defense on the way to his third TD of the night. This time it was from 41-yards out and when Smith converted the PAT, Grapeland led 40-28.

With time running down in the third quarter, Groveton took over at their own 29. Wells moved the Indians out to midfield, but on the last play of the quarter, Ashford stepped in front of a Wells’ pass and returned it 55 yards to pay dirt. The pick six brought the third quarter to a close with Grapeland up by a score of 46-28.

The Indians’ next drive ended in disaster. Staring at their own 45, Byron Thomas lost five yards on first down and then on second down, Wells was wrapped up and stripped by Cooper Sheridan giving the Sandies the ball at the Groveton 41.

The Sandies, aided by a personal foul against Groveton, moved inside the red zone and with 9:33 left in the game. On first down, Smith took a handoff and plowed his way into the end zone from 17 yards out to ice the game. Ashford added the two-point conversion to make the score 54-28 with 9:33 remaining in the contest.

The Indians added a late score on a five-yard TD from Jefferson and a two-point conversion from Luke Taylor to bring the final score to 54-36.

The win moves the Sandies to 2-0 in district play and 6-1 on the season. It should be noted this is the first time since 1974 that Grapeland has defeated both Alto and Groveton in the same season. The Sandies next opponent will be the undefeated Normangee Panthers. Kickoff is scheduled for 7pm at Sandie Stadium.