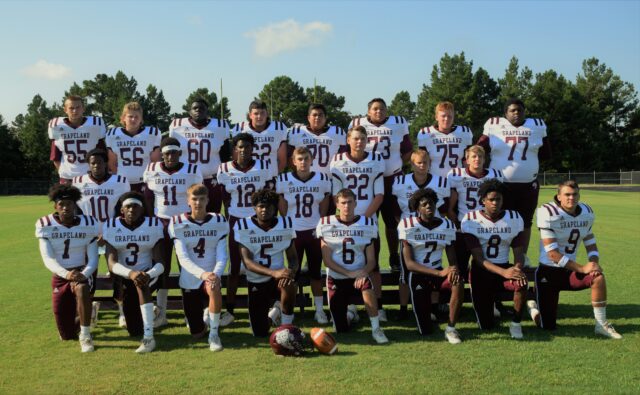 KIRBYVILLE – The Grapeland Sandies were riding high with a 3-0 record when they hit the road last Friday night to take on the Kirbyville Wildcats. The Sandies had defeated a quality Shelbyville team, handled a rivalry game against the Elkhart Elks and blew out the Cayuga Wildcats during the Wildcats’ homecoming game.

These were a different breed of Wildcats last week. The Class 3A DI Kirbyville Wildcats came into the game with a mark of 2-0 but had been picked to finish dead last in their district in preseason polls.

Following Friday night’s performance, the early season prognosticators might want to rethink where they picked Kirbyville. While the Sandies seemed to be firing on all cylinders coming into the game, it looked like they blew a gasket before halftime last Friday as they fell to the Wildcats 61-18.

The game started out as a defensive struggle with both teams punting to each other four times in the early going. The Wildcats finally found the end zone with just under six minutes remaining in the period when Hunter Wallis ripped off a 35-yard scoring run. The extra point was no good.

The Sandies answered right back, however. Starting at their own 39, Grapeland worked the ball inside of Kirbyville territory, thanks to a nice run from Cadarian Wiley down to the 27-yard line. Two plays later, BJ Lamb broke free, made one Wildcat defender miss and scampered 25-yards to pay dirt. The two-point conversion was no good, but with just over three minutes left in the quarter, the score was tied at 6.

Following the kickoff, the Wildcats made it out to midfield, but a fumble gave it right back to the Sandies. Once again, Wiley moved the Sandies into scoring position with a solid run inside the Kirbyville red zone, which brought the first quarter came to an end.

As the second quarter got underway, the wheels came off for Grapeland. Disaster struck on third down as Lamb was intercepted by Collin Brandon who returned the ball 80 yards for a pick six. The extra point was good and gave the Wildcats a 13-6 lead at the 10 minute mark of the second quarter.

The Sandies’ next possession started at their own 38 but the offense was unable to generate anything positive and was forced to punt.

The Wildcats took over at their own 39 and three plays later, Kirbyville’s Paul Burchett connected with Wallis on a 31-yard scoring strike. Cal Jones knocked home the PAT and with five minutes left in the half, the Wildcats now led 20-6.

A second consecutive three-and-out from the Sandies offense gave the ball right back to Kirbyville at their own 47. It didn’t take long for the Wildcats to find the end zone once again as Jones connected with Keshaun Keyes for a 21-yard TD to extend the lead to 26-6 with under two minutes left in the quarter.

Grapeland had one last chance before the half to get something going on offense but it backfired when Lamb was picked off. Less than a minute later Wallis was back in the end zone and when Jones nailed the XP, the Wildcats led 33-6 and brought the first-half scoring to a close.

The second half didn’t start any better for the Sandies as Jones and Keyes hooked up again – this time for a 15-yard TD. The PAT made it 40-6.

Grapeland did manage to score twice more in the second half when Omarian Wiley hauled in a 47-yard TD pass and Cadarian Wiley plowed across the goal line from 12 yards out. Unfortunately, the Wildcats added three more scores as the Sandies fell by a final of 61-18.

The Sandies will be back in action on Friday, Sept. 25 as they host the Burkeville Mustangs. The kickoff is scheduled for 7 pm.