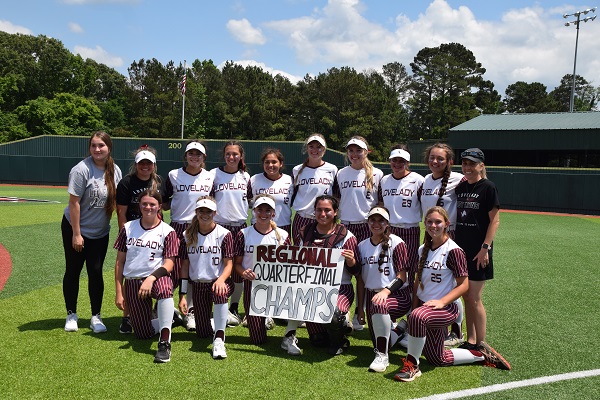 RUSK – After the Joaquin Lady Rams picked up the Game One win over the Lovelady Lady Lions on Thursday, the pressure was on the Lady Lions Friday night.

Lovelady rose to the occasion, however, as Scout Lovell homered twice while Macie LaRue and Mimi Sandoval pitched seven innings of shutout softball to even the Regional Quarterfinals series at a game apiece.

Saturday was Game Three and for one team it would be the end of the road while the other team would advance to the Regional Semifinals.

Joaquin came into the series ranked #5 in Class 2A while Lovelady was ranked #8. The question was, who would blink first? As it turned out, it was Joaquin as Lovelady scored in the first inning and then held on for a 5-2 win to advance to the fourth round of the postseason.

Mimi Sandoval was in the pitchers’ circle for the Lady Lions to open the game and she worked an easy 1-2-3 inning. She forced Ebbie McCann to pop up to second, got Jayden Bass to ground out to short and then got a little help from Makenna Pierce who ran down a deep drive from Kennedy Stanley for the final out of the Joaquin top of the first.

Chloee Mason was back in the circle for the Lady Rams and the first batter she faced was Scout Lovell who had rocked her for two homers in Game Two. Mason went right after Lovell and got her to foul out to McCann behind the plate.

Up next was Jacy Stubblefield who dropped a bunt in front of the plate, beat the throw to first and then stole second. Sandoval followed in the order and on a 1-2 pitch, she ripped a double to the wall in left, driving in Stubblefield from second.

Macie LaRue came in as a courtesy runner for Sandoval but couldn’t get past second base as Linda Martinez struck out while Haven Prager tapped back to the circle for a 1-3 force at first to end the frame.

Following a quiet second inning, the game moved into the third where Lovelady extended their lead to 3-0. After the Lady Rams were unable to do anything in their half of the inning, the Lady Lions pounced.

Stubblefield led off with a double but when Sandoval popped up and Martinez was ruled out on a questionable batters’ interference call, it seemed like she might be stranded. Prager, however, came through in the clutch as she hammered a double into left, driving in Stubblefield and making the score 2-0.

Morgan Womack followed with a single up the middle which moved Prager to third. Womack stole second and, on the play, Prager scampered home to push the lead to three.

Mason was able to finally get out of the inning but when she singled to open the top of the fourth, her teammates were unable to do anything to help her out, bringing the Lady Lions back in from the field.

Rylee Biedrzycki led off the bottom half of the inning with a double to left and moved to third when Pierce was able to beat out a bunt. She stole second but after Lovell fanned and Stubblefield popped out, it looked like Mason might get out of the jam.

Sandoval, however, had other ideas as she helped herself out with a single that drove in Prager and Pierce to make the score 5-0.

That was all the Lady Lions could muster as Mason got Martinez to ground out to end the fourth.

When Joaquin came in from the field, they struck back. King led off with a single, but Sandoval struck out Harvey and caught McCann looking at strike three for the second out. A misplay in the outfield allowed King to score and Bass to reach third. A ball hit by Stanley was just out of the reach of Bailee Albinus, allowing Bass to race home and making the score 5-2.

At that point, Coach Jordyn Hester went to her bullpen and brought LaRue on in relief. LaRue did her job as she retired Mason on a little flare to first to end the top of the fifth with the Lady Lions still up by three.

Aside from a single by Erin Sample, Lovelady went quietly in the bottom of the fifth as the game moved into the final two innings of play.

LaRue continued to frustrate hitters as she got Pena to fly out while she fanned Baker and Brooks to close out the Joaquin half of the sixth. Mason was equally as effective as she retired the Lady Lions in order to send the game into the seventh and give the Lady Rams one last chance.

King led off the top of the seventh with a double for Joaquin, but LaRue came back to strike out Harvey. A single from McCann moved King to third as McCann took second on the throw. With runners in scoring position, LaRue forced Bass to hit a soft liner to third for the second out and then got Stanley to fly out to right field to end the game and give the Lady Lions the 5-2 win, sending them to the Regional Semifinals later this week.

Sandoval got the win as she pitched 4.2 innings and gave up two runs on three hits. She also struck out three and walked three. She was also 2-3 at the plate with three RBI.

LaRue picked up the save with 2.1 scoreless innings of work. She also struck out three.

Mason was saddled with the loss after she gave up five runs on nine hits in six innings. She also struck out five and didn’t walk anyone.

Stubblefield also had a good day at the dish as she was 2-4 with two runs scored.

The win moves the Lady Lions into the Regional Semifinals where they will face the Como-Pickton Lady Eagles in a best-of-three series. All games will be held at Whitehouse High School in Whitehouse. Game One is scheduled for Thursday, May 20 at 7 pm. Game Two is scheduled for 5 pm on Friday, May 21 and if necessary, Game Three will follow shortly after the conclusion of Game Two.

Third Quarter Outburst Lifts Elkhart over Troup, 21-14
Elks Trip up Indians
Grapeland Golf off to Strong Start
Please follow and like us: