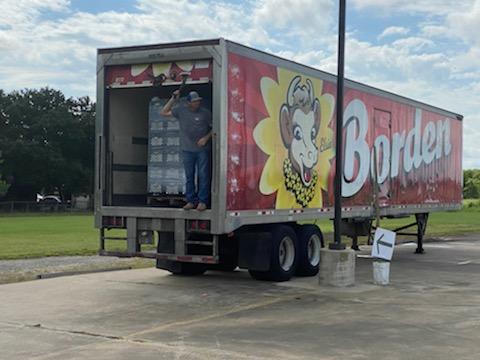 CROCKETT – The COVID-19 pandemic has taken a toll in a variety of ways. Many people have come down with the virus and a growing number have perished. Others have lost their jobs or had their hours slashed to a bare minimum. Many are struggling.

There is hope on the horizon, however, as a program to help make things just a little better for the people of Crockett and Houston County has been started.

Known as Standing with Crockett, the program was the idea of Reverend Leon Wallace of Good Shepherd Fellowship Church in Crockett. He has been distributing fruit, vegetables and other assorted produce to area residents for nearly two months and on Tuesday, July 28 he began to distribute milk.

“We were out at the Crockett Civic Center and we had two different 18-wheelers that came into today. It was our first time to do the milk truck. Borden’s Milk sent us about 4,400 gallons of milk and it was our ninth time to do the produce truck. It had about 1,550 boxes on it,” Rev. Wallace said.

By 2 pm, he explained, the operation had gone through all of the produce and were down to around 400 gallons of milk.

Asked what led to the idea for the creation of Standing with Crockett, the pastor said he had a friend who was involved with a government program established earlier in the pandemic called “Farmers to Families.”

“It’s a program to help companies and individuals who were hurt during the shutdown. The company who is sending us the boxes is a company called DiMare (Fresh). About 80 percent of their business was providing fresh tomatoes to restaurants. The government gave them a contract to do these boxes. They fill them with six different items such as apples, oranges, potatoes, onions and beans. They ship them to non-profits or food banks and then they are reimbursed,” he explained.

Wallace said there were other companies involved with the produce distribution program and added Borden’s Milk now has a contract with the government to distribute milk.

“They are supposed to be sending me two 18-wheelers a week on Tuesdays and Thursdays, so it is about 8,800 gallons of milk. We distribute that here in the parking lot of the civic center. We just tried to do something and it turned into a wonderful thing. We have great volunteers and it is pretty much going through all of Houston County,” he said.

Concerning the produce boxes, Wallace said today marked a milestone of sorts as 13,500 boxes had been delivered to area residents.

“This is day 57 of this and I’m just trying to make a difference in the community. One of the things we started doing early on is I have a tent outside of the church and I’m out there at 6:15 in the morning. I wave at people and if they need prayer or just want to talk they can just stop by. It has been an incredible experience and it looks like it is just getting started,” Wallace said.

As to who is eligible, the minister explained, “Everybody. This is not a poverty program. This is an investment in Crockett, Texas and Houston County. Anybody. There are no qualifications. We don’t ID anyone. We give two of everything we have to each family and ask them to pass one along. It’s for any and everybody.”

“The community has been incredible, as far as volunteering,” he continued. “I have probably had at least 50 people who came and got boxes and took them to elderly people and shut-ins or people who couldn’t get here. It’s really a beautiful community effort. People helping people. We also had about 40 people from the community who showed up to help load the boxes. We load up their cars so they don’t have to get out. We ask them what they need and what they want, we load it up and give them a great smile and tell them to come back next time.”

According to their Facebook page Standing with Crockett “… is simply believing that the 6,500 strong who live in Crockett, Texas are valuable. We strive to improve their lives through service, acts of kindness etc.”

My Vote Doesn’t Matter or Does It?
No ‘Big Brother’ for Palestine?
Grapeland FFA Quiz Team Wins Fifth National Championship