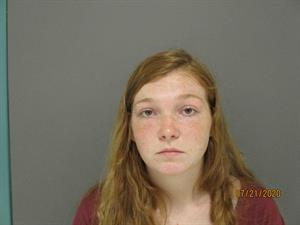 GRAPELAND – New details have emerged in the death of a 17-year-old high school student as an 18-year-old Grapeland woman has been arrested and charged with criminally negligent homicide.

On July 14, it was reported Grapeland High School student David Dunn had perished from an apparent drug overdose at a residence located off of FM 1272, in Grapeland. A second unresponsive male – identified as 19-year-old Jaelyn Reed – was airlifted to a Tyler hospital, where he remains.

However, as the investigation into the incident continued, it was discovered a fourth person was involved in the tragedy and on Tuesday, July 21, Ashley Langham was taken into custody and charged with a state jail felony in connection to Dunn’s death.

Langham was involved in a relationship with Duhon and shared a residence, located at 251 PR 6263, with him. She was not at home when the drugs were found by law enforcement officers.

In an affidavit of probable cause, it was stated Duhon and Langham had taken Dunn and Reed to Houston on the night of July 13 with intent to purchase an unknown quantity of drugs.

At the time of his arrest, Duhon stated Dunn and Reed had spent the night at his residence and when he left for work the next day, they were both asleep on the couch. Duhon also admitted they had all been taking Xanax the previous night.

It was later learned when Duhon got ready to leave for work the next morning, Dunn and Reed were still passed out in Duhon’s truck.

When Duhon returned home from work “… he located his friends – unresponsive – in the truck’s back seat. Dylan stated he did not know how they ended up in the back seat of the truck.”

Langham was taken into custody and booked into the Houston County Jail on the charge of criminally negligent homicide, a state jail felony.

Langham’s bond was set at $8,000. It was posted on Tuesday, July 21 and she was released pending further legal proceedings.