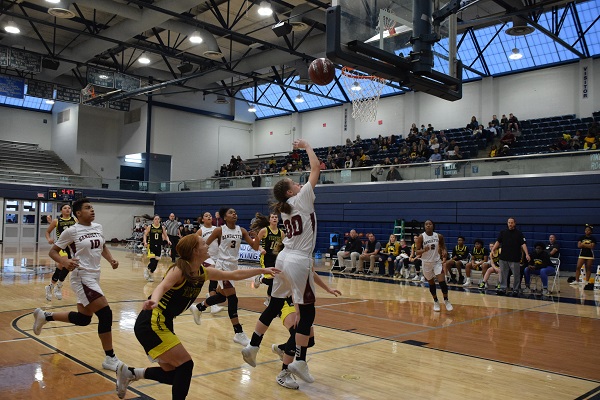 BRYAN – For the second year in a row, the Grapeland Sandiettes traveled to Bryan for the Regional Tournament. Last year, Grapeland flew under the radar all the way to the State Finals where they lost a heartbreaker to the Martin’s Mill Lady Mustangs, 60-56.

This year, however, the Sandiettes were playing with targets on their backs. They had been ranked in the Top 10 for most of the year and the Top 4 were the second half of the season.

Coming into the game, the Sandiettes were ranked at #4 and had a record of 34-5. Their Regional Semifinal opponents were the Timpson Lady Bears.

The Lady Bears were making a return trip to the semifinals after falling to the Marlin Lady Bulldogs, 48-30, during last year’s Region III tournament.  Timpson came into this year’s Regional Semifinal game with a record of 30-6 and a #22 ranking in the final TABC regular season poll.

While Timpson fought hard throughout the contest, Grapeland was simply too much for the Lady Bears to handle as the Sandiettes won the first Regional Semifinal game of the night, 59-42.

As the game got underway, the Lady Bears appeared frazzled by the Sandiettes’ defense. Grapeland scored four points in less than 30 seconds and after a Timpson turnover, the Lady Bears called a timeout.

The strategy didn’t seem to work as the Sandiettes held Timpson scoreless for the first 4:30 of the game. By the time the Lady Bears got on the board, the Sandiettes had built a double digit lead and when Grapeland’s Jessie Payne connected from downtown at the one-minute mark of the first quarter, the Sandiettes led 20-7.

Payne led the Sandiettes in scoring with eight points during the first eight minutes of play. Teira Jones worked inside for six, Kenya Woods had four and Tatiyana Bowie chipped in a basket.

Timpson’s first quarter points came from Jaycee Campbell and Harlie Ware, who both hit from behind the arc, while Laiton Braddock made one of two from the line.

The Grapeland offense went cold from the field in the second quarter. Bowie and Woods both had two while Payne converted one of two from the line to help give the Sandiettes a 25-14 lead at halftime.

Despite the Sandiettes’ shooting woes, the Lady Bears were unable to take advantage of the situation as the Grapeland defense kept Timpson in check.

Brylee Behrens knocked down a three-pointer while both Braddock and Campbell both had two apiece to round out the Lady Bears’ first half scoring.

Following the break, the Sandiettes put the game away as they opened up a 20 point lead by the end of the third quarter. KeKe Harris came out on fire after halftime nailing a trio of three-pointers as part of her 11 points in the quarter. Bowie, Jones and Woods all chipped in two apiece to help Grapeland take a 42-22 lead into the final period of play.

For the third quarter in a row, the Lady Bears were held to single digits. Braddock had four while Behrens and Claire Johnson both had two.

The Sandiettes began to milk the clock as the fourth quarter got underway. Grapeland would work the ball around the perimeter until someone sprung free for an easy lay-up.

Payne added five to her total while Harris and Jones had four apiece. Bowie converted a pair of free throws while Christi Shepherd added a bucket to close out the Grapeland fourth quarter scoring.

Timpson finally broke into the double digit mark in the fourth quarter but it wasn’t nearly enough as the Lady Bears fell to the Sandiettes, 59-22.

The fourth quarter scoring for Timpson showed: Behrens with eight; Ware with four; Braddock and Campbell both with three; and Johnson with two.

On the game, the Lady Bears were led in scoring by Brylee Behrens with 13 points and Laiton Braddock with 10. Jaycee Campbell netted eight, Harlie Ware went for seven and Claire Johnson added four to close out the Timpson scoring.

The Sandiettes were led by KeKe Harris with 15 points and Jessie Payne with 14. Teira Jones knocked down 12 while both Tatiyana Bowie and Kenya Woods had eight. In addition, Christi Shepherd had two.

The win moved the Sandiettes into the Regional Finals where they faced the Woden Lady Eagles, who won the second Regional Seminal of the night over the Crawford Lady Pirates, 42-30. The Finals match-up is covered in another article.