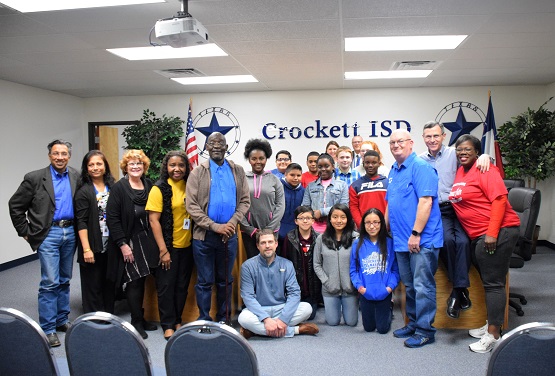 CROCKETT – During a regular meeting of the Crockett Independent School District Board of Trustees, held on Monday, Feb. 24, Crockett Junior High UIL participants were recognized by the board.

CISD Board Vice President Karen Norman opened the meeting and the first order of business was the recognition of the UIL participants.

“Our first order of business tonight is student commendations and we have our Crockett Junior High UIL students here with us tonight,” Crockett ISD Superintendent Terry Myers said before he turned the floor over to UIL Coordinator Urvi Bhatt.

“This is my first year doing UIL,” Bhatt said. “For junior high, as a school, we were third place.”

After rattling off a list of students and where they placed, Bhatt turned the meeting back over to the superintendent who commented how proud he was to be associated with the students.

“Students, before we let you go, I want you to know it is cool to be smart,” Myers said. “If someone calls you a nerd, you know what that stands for in about 10 years down the road? It means boss. I am very, very proud of you as I know this board is and this administration is. We look forward to big things from you at the high school level. You can’t slow down. You have to keep doing what you have been doing. Thank you for being the smart, cool kids.”

Also present was UIL One-Act Play Coordinator Janet Walker who said the junior high performed “The Happy Scarecrow” at the district competition. Following the introduction of the cast and crew, Walker said the play placed second.

She added the high school OAP cast and crew traveled to Natchitoches, La. recently to get a better feel for “Steel Magnolias,” – the play they are performing at district.

Following the UIL student’s recognition, the superintendent reminded the trustees about the “Team of Eight” training which would be held on March 23.

After the superintendent’s report, the next item on the agenda concerned the May 2 election. Myers reported District Five Trustee Dr. John Garner had not drawn an opponent and that part of the election would be cancelled.

Mo Amjad in District Two had drawn a challenger in Stephen Tuggle but Myers indicated, “The Attorney General has ruled that someone can actually withdraw from that election all the way up until the time we order ballots. So, should there be a withdrawal between now and then, we still may get a chance to cancel the election.”

Myers added, “This is the best board I have worked with in my career. This is a great board of education and I certainly hope we can keep them intact. They do a great job here, they are unselfish with their time and they do a great job of keeping their personal feelings out of this stuff while representing the children in this district very well. I say that about all seven of you.”