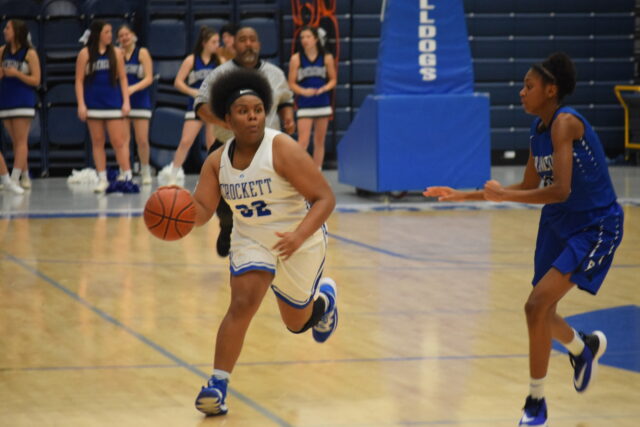 CROCKETT – The Crockett Lady Bulldogs welcomed the Frankston Maidens to town for a District 20-3A matchup on Tuesday night in a game with playoff implications.

The Lady Bulldogs still had an outside shot at a spot in the postseason, but they would need a lot of help.

Meanwhile, Frankston was in a battle for the second seed out of the district. A win would guarantee a spot in the playoffs but a loss could knock them down to the fourth seed.

Through the first three quarters, it looked as if Crockett might pull an upset, but in the end Frankston was simply a little better as the Maidens won by a final score of 46-42.

As the game got underway, the two teams raced up and down the court but had trouble finding the basket. Tynaisha McKnight broke through for the Lady Bulldogs with six points in the first quarter while Jaycee Parker connected from downtown and Tocarra Johnson powered in two.

Frankston’s Tia Billingsley and Keryonna Eldridge dropped in five apiece while Abbie Ramsey hit a shot from behind the arc to help give the Maidens a 13-11 lead after one.

The second quarter saw Crockett out-hustle Frankston on the defensive end of the court which allowed them to tie the score and eventually take a three-point lead into the locker room at halftime.

Parker got hot from the perimeter with eight points while McKnight had three and JaKenya Tryon chipped in a basket to help give the Lady Bulldogs a 24-21 lead.

Billingsley and Kelsey Looney both had three for the Maidens while Maggie Caveness added a basket to round out the Frankston first half scoring.

Following the break, the two teams played fairly even. Parker and Alinjah McKnight put in four apiece for Crockett while Johnson had three.

The Maidens saw Brianna Looney find the scoring column with five while Ja’shalyn Hatton converted three of three from the line. Both Billingsley and Ramsey added two as Frankston cut the Crockett lead to 35-33.

In the fourth quarter, the Lady Bulldogs offense went cold as they only managed seven points. Johnson had three while A. McKnight and Parker split the other four.

Frankston managed to take the lead midway through the quarter and then held on for the 46-42 win. The Maidens fourth quarter points came from Billingsley and Eldridge with four apiece while Ramsey made three of four from the charity stripe and B. Looney chipped in a basket.

On the game, the Lady Bulldogs were led in scoring by Jaycee Parker with a game-high 17 points. Tynaisha McKnight put in nine and Tocarra Johnson had eight. Closing out the Crockett scoring, Alinjah McKnight had six and JaKenya Tryon had two.

The Maidens were paced by Tia Billingsley with 14 points and Keryonna Eldridge with nine. Abbie Ramsey dropped in eight, Brianna Looney added seven while both Ja’shalyn Hatton and Kelsey Looney had three. Maggie Caveness closed out the Frankston scoring with two.

The Lady Bulldogs were back in action on Friday as they concluded their season in Westwood against the Lady Panthers. As of press time, however, the final score was unavailable.