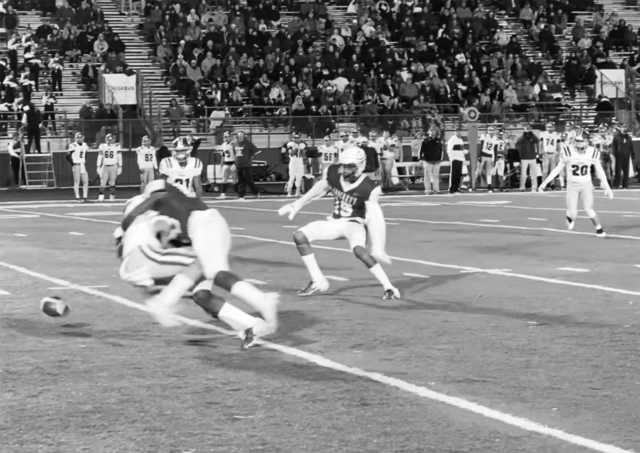 COLLEGE STATION – For the better part of three quarters, it appeared the Crockett Bulldogs might punch their ticket to the Regional Round of the playoffs. They had jumped out to an early lead and managed to answer every score with a score of their own against the #6 Troy Trojans.

Unfortunately, it was not meant to be as the Trojans scored 15 points in less than a minute to open the fourth quarter as they defeated the Bulldogs by a final score of 50-33.

The Bulldogs opened the game with a fantastic kickoff return down to the Troy five-yard line. Two plays later, Jordan Bedford punched it in on a keeper to give the Bulldogs an early 7-0 lead, following the Antonio Cruz PAT.

Troy answered back as they used the legs of Zach Hrbacek to drive deep inside Bulldog territory. On first and 10 from the 24, Hrbacek broke free on a run up the middle for six points. The extra point tied the game at seven, but then it was Crockett’s turn.

The Bulldogs were unable to generate any offense and were forced to punt. On the kick, however, Xzavian Walker blasted the Cumby receiver causing a fumble. Walker alertly pounced on the ball, giving the Bulldogs possession at the Cumby 22.

After moving inside the 10, Bedford found TE Allen Horace on an 8-yard out route for a TD to put the Bulldogs back in front by a score of 13-7.

As the second quarter got underway, the Bedford-to-Horace connection worked once again as Crockett launched a drive which ended with a 16-yard TD to give the Bulldogs a 19-7 lead.

Back-to-back TDs from Hrbacek gave the Trojans a 22-19 lead, as time began to become a factor in the first half.

Bedford managed to get in just under the gun as he scored from five yards out to give the Bulldogs a 26-22 lead as the two teams headed to the locker room at halftime.

The Trojans started the second half with possession of the ball and reclaimed the lead on Ben Presley’s one-yard plunge, after driving the length of the field.

Crockett responded once again as they returned the favor and drove deep inside Trojan territory. From there, it was the Bedford-to-Horace show as the duo connected for their third TD of the night. This time it was a 17-yarder right down the middle. The Cruz extra point made the score 33-29 at the midway point of the third.

The two teams exchanged possessions as the third quarter came to an end. However, on the first play of the fourth quarter, Hrbacek took off on a 52-yard TD scamper to put Troy back in the lead, 36-33.

Disaster struck on the Bulldogs next possession as a fumble gave the ball right back to the Trojans in the Crockett end of the field. The fumble recovery set up a nine-yard TD run from Sam Jones which made the score 42-33, Troy.

Troy would add another touchdown midway through the fourth quarter on Hrbacek’s fifth TD of the game to make the final score 50-33.

Crockett finishes its season with a 9-3 record and the Bi-District Championship, after finishing second in District 11-3A DI.