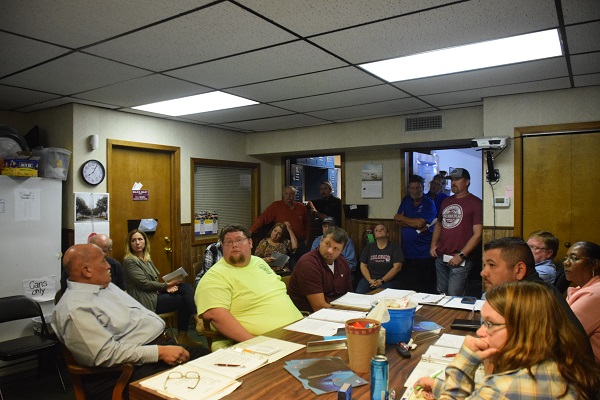 The Bloom is Off the Rose

GRAPELAND – The honeymoon between Grapeland residents and the Darling Ingredients plant located on the east edge of the city appears to be over.

During a Grapeland City Council meeting held on Monday, Oct. 7, approximately 20 Grapeland residents were in attendance to voice their opinions about smells emitting from the Darling plant.

Mayor Balis Dailey opened the discussion on the Darling plant and said, “Before we do this, there are a number of people here to speak on the matter. The issue is not that it’s not there. It is. It’s consistent and we have been working on things to get it taken care of but we need additional work. The reason for that is when it comes to odors, the law is a little bit on the ambiguous side. It can be done and there are things that have to happen but it takes a while to do that. What we need to focus on is not the how and what – because we know that’s here – but what can we do? What is our solution and how can we work on that to get it accomplished.”

Opening the floor to the public, a statement was made that with the smell coming from Darling, no one was going to want to build in the Grapeland area. In addition, it was indicated property values were declining because of the odors.

Another resident asked, “Where’s Darling? Where are the representatives from Darling? The management – they’re the ones who have the problem – whether they’re not running the plant right or whether it was not built right. You don’t spend $40 million to build a facility in 2020 and not make it state-of-the-art. There is no reason for that smell.”

“What is the next step?” a resident asked. “Apparently, talking to them is not working.”

A different resident said she had spoken with the Texas Commission on Environmental Quality and hat she was on a list to receive the final documentation when all this is over.

“The lady (with TCEQ) did say there were seven counts of violations against them, as of a couple of weeks ago. She said she was just out there and didn’t smell anything. I told her you can’t pinpoint when the smell starts. It’s at all different times and for different lengths (of time),” she said.

As the discussion continued, Dailey said he and the council had been in contact with TCEQ were working on drafting a public nuisance ordinance.

“Every time they have been investigated out there,” Dailey said, “they throw up to me that they have a clean bill of health, whether it’s because when they (TCEQ) got there, they couldn’t smell the smell. The smell did occur and we need to keep calling them. I have made a list of contacts for you to call.”

After several minutes of discussion, Dailey suggested those in attendance form a committee and keep records on when the odors occurred. Councilman Justin Lumbreraz volunteered to head the committee. The records will be turned over to the TCEQ for further action.

Prior to the Darling discussion, the council approved the resignation of Klint Dailey. Dailey has taken a position out-of-state and had previously submitted his resignation.

“Klint has until May of 2020 and then he will come up (for election) with the others who are due at that time,” the mayor said.

Dailey added Mitchell Woody had expressed his interest in the position and “… his background check has been completed. He has been checked with the Attorney General’s Office and with the Texas Municipal League and they have concluded he is eligible to fill the term.”

“With all of qualifications having been met to fill the seat, I ask you to consider appointing him to that seat,” he said.

A motion was made, seconded and approved to appoint Woody to the vacant council seat. Woody was sworn-in by Dailey and assumed his seat at the council table.

In other matters brought before the city council: