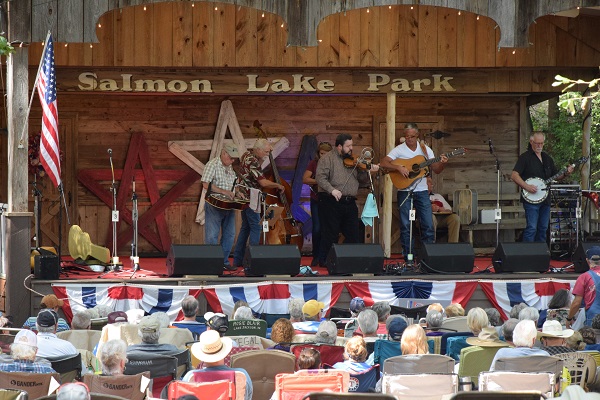 GRAPELAND – The 43rd Annual Labor Day Bluegrass Festival was held this past week/weekend and once again it was met with rave reviews.

Festival coordinator and promoter Collee Biller-Littlefield spoke about the recently concluded event on Tuesday and said, “It was wonderful! The weather held out for us and while it was warm, nobody suffered a heat stroke.”

Biller-Littlefield said the venue – Salmon Lake Park – had a lot of drive in traffic on Saturday night for the Malpas Brothers as well as on Friday night for The Grascals.

“We had 180 campers out here and we also had plenty of drive-ins before that. At any one particular time we had between 500 and 600 people,” she said.

Changing gears somewhat, the event coordinator said the Bluegrass Festival normally brings a ton of revenue into the city of Grapeland and this year was no different.

“I know the attendees frequent the Dollar Store and Brookshire Brothers. I also heard the Methodist Church, between the barbecue and the garage sale, did quite well. We put flyers in our packets and our people go before the music starts,” Biller-Littlefield explained.

“They go out early in the morning to hit the garage sales, go to the Methodist Church, the library and whatever else is going on,” she said.

The park was in great shape, Biller-Littlefield said, and lauded the Powers family for their efforts in keeping up and making improvements to the park.

“They are improving things all the time,” she said. “They are the hardest working people I’ve ever seen. They love it and they want to keep it going. We love the fact they haven’t thrown their hands up in desperation.”