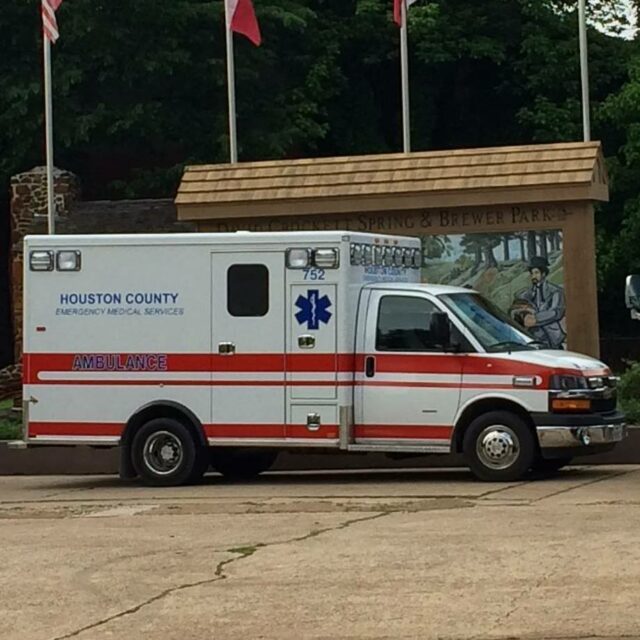 HOUSTON COUNTY – During a meeting of the Houston County Hospital District (HCHD) Board of Directors, held on Tuesday, Aug. 20, a discussion about payments from the Grapeland Hospital District to the HCHD took a rather ghoulish turn.

As she continued, Pipes brought up a subject the HCHD board had previously grappled with – providing ambulance service to the Grapeland area with no reimbursement.

“Providing mutual aid – there were 15 and mutual aid utilized was zero. I can tell you if you read the second part of the letter Chris Furry (Senior Operations Manager at Lifeguard Ambulance Service) sent us – the Grapeland calls – there were 15 that the dispatch center is showing for Grapeland. Grapeland did respond to five of them but we assisted them on the scene or transported the patients from the scene for all five of those. For the last three months, we have done all of Grapeland’s calls,” Pipes asserted.

“I’m to the point,” she continued, “I think we have to do something about that. Either the county needs to pick up part of the subsidy because of what we’re doing for Grapeland since Grapeland doesn’t want to pay us anything. Our contract says Lifeguard does not have to go to Grapeland. If Grapeland people realize it – and I don’t think many of them do – if we follow the contract, we don’t have to go there. If something happens and someone gets hurt or gets really sick and we don’t go there, it’s on them. It’s their issue. Their ESD (Emergency Service District #1) doesn’t want us there.”

Pipes added she believed the biggest obstacle facing the ambulance service was the runs made to Grapeland for which the HCHD received no reimbursement.

“We need to genuinely try to work this out,” HCHD Board VP Dr. John Stovall said.

“The problem is their ESD was set up before ours was,” Pipes said. “Their ESD was set up as fire and ambulance. Our ESD is only set up as fire and they only give to fire stations around here. They don’t do anything for the ambulance. They (ESD #1) have their own ambulance that is strictly volunteer. That’s all well and good, but when you have an emergency where you need a paramedic, they don’t always have that.”

Board President Barbara Crowson said representatives from the HCHD had previously been to a Grapeland Hospital District meeting and made requests for what Pipes was alluding to “… and I called them twice but there has been no response. I’m personally in agreement with the ambulance personnel in that I don’t want to go to sleep at night worrying that someone might die in the Grapeland Hospital District because our ambulance didn’t go there.”

“I agree,” Crowson continued. “Something needs to be done. We have reached out but nothing has been done. I’m going to put it this way. The best that I can figure out is this is like a 50-year-old drama between them and us. Nothing is being done.”

Crowson said she felt the county should step in and do something but explained in a recent commissioners’ court meeting, “… they simply said, ‘We’re out of the business of ambulance contracts. No more interlocal agreements. The ambulance contract is going to be with the hospital district.’ It’s our baby and we’re supposed to rock it.”

“I can tell you it would be a huge liability,” HCHD Board member Rhonda Brown said, “if someone in the southern part of the county was in a life-threatening situation and Lifeguard is servicing the northern part of the county where they are not even required to go, whoever that person is, they could probably sue them – big time – if they wanted to.”

Board member Karen Duncan also weighed in on the matter.

“I think there should be a small delegation to meet with the Grapeland Hospital District Board and really negotiate, before we start drawing a hard line and saying no. I had a friend who actually lost her life when we didn’t have a hospital here. By the time they got her to Palestine, she died within 30 minutes. I am not going to quibble over a few dollars when someone’s life is on the line.  I’m not going to do it. If people out here (in the audience) – if your money is so important – that you would rather someone die, then fine. I’ll pay the money somehow and put it back in your pocket. We have an obligation to the people of this county.”

“We have an obligation to the southern part of the county, not the northern part,” Brown countered.

“Just because you live in Grapeland, it doesn’t mean your life is any less valuable,” Duncan replied.

“They have to work with us,” Brown said.

After a few minutes of discussion, Robert Saunders with AMR/Lifeguard Ambulance Service addressed the board.

“If you’re going to get a committee to go to Grapeland, I would be more than happy to go up there with them. There is no right or wrong to this. We don’t want to leave someone up there to die but at the same time we do have a contract with the southern part of the county,” he said.

“If you take 720 hours in a month and we have two ambulances and double that – we did 15 calls. Out of almost 1,400 hours, we used 15 hours to do that. Yes, we need to talk with them. I think it is more of a concern to the state. With the EMS and the state, you tell the state what area you’re going to run. The Grapeland area is covered by Grapeland EMS. If we’re running that, they’re not abiding by what the state says. So, if they are running one, two, three or four, if they’re running 25%, the state doesn’t care. If they’re running 0%, that’s a different matter.  That would be, as the EMS provider, something we need to sit down with Grapeland and talk about,” Saunders said.

Once Saunders concluded his statement, Crowson explained when the HCHD met with the Grapeland Hospital District “… we quoted a figure to them. At the time we were looking at the statistics and it’s not always 15. It has been lately, but there were times when it was eight or so. We talked about $1,000 since we’re paying $20,000. It did not get a positive response.”

Because the agenda item was for discussion only, no action was taken on the matter.

Comptroller to Send April Sales Tax Allocations to Cities and Counties
Medal of Honor Recipient Honored in Palestine
Crockett Man Arrested for Aggravated Sexual Assault
Please follow and like us: