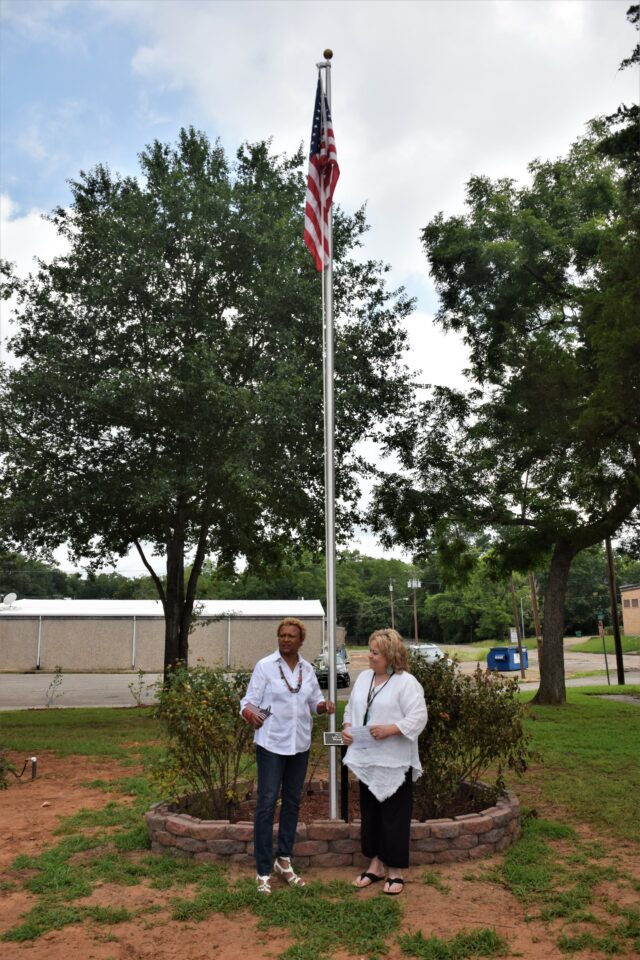 CROCKETT – A ceremony was held in the city of Crockett on Monday morning, July 8 as a flag and flagpole were celebrated in front of the new gazebo, across the street from City Hall.

Former Crockett Mayor Joni Clonts opened the ceremony and welcomed everyone in attendance before turning the program over to Rev. Steve Meadows for an invocation.

Once the Westside Baptist Church minister concluded, Clonts – instrumental in getting the gazebo and park built – recognized some special guests in the crowd.

“I would like to welcome Cyndy Keys from Woodmen Life, along with Lois Milstead and Mike Jaetzold. Thank you for donating the flag and this beautiful flag pole in our new park area. I would also like to welcome Mayor Dr. Ianthia Fisher, Councilmember Marquita Beasley and all the other city officials here today,” she said.

After the flag was raised and the Pledge of Allegiance was recited, Clonts continued.

“The American flag is recognized throughout the world. It symbolizes strength, character, what America is built upon – the values of our country. For 243 years, people have fought to defend the flag and our country. People have lost their lives fighting for what they believe in. This is a wonderful thing,” she said.

Cyndy Keys was next to speak and she thanked the city for allowing Woodmen Life to be a part of the Monday morning ceremony.

“I remember standing with Joni in the parking lot of that big, old white building – it was such an eyesore – long before her tenure as mayor. She said she wanted to put a park there for the children and for families. This park can make us all come together. Thank you Joni for sticking to that vision. I also want to thank (City Administrator) John Angerstein for not being ugly to me. I bugged the crud out of him about if we would get this up by the Fourth (of July) and we did. Thank you to the city workers who did such a great job. I really appreciate it,” Keys said.

“This is such an awesome thing,” she said. “Just like Joni, I love the flag. When I came in (to office), my theme was ‘Building Bridges.’ Joni has built a beautiful bridge here. The park has just added to our city. We appreciate all that Joni has done. Everything that happens in our city is a foundation and this is one step – it’s like one small step for man but a giant step for our city.”

The ceremony was closed out by local realtor Karen Rice who recited the American’s Creed.

The creed states, “I believe in the United States of America as a government of the people by the people, for the people, whose just powers are derived from the consent of the governed; a democracy in a republic; a sovereign nation of many sovereign states; a perfect union, one and inseparable; established upon those principles of freedom, equality, justice and humanity for which American patriots sacrificed their lives and fortunes. I therefore believe it is my duty to my Country to love it; to support its Constitution; to obey its laws; to respect its flag, and to defend it against all enemies.”