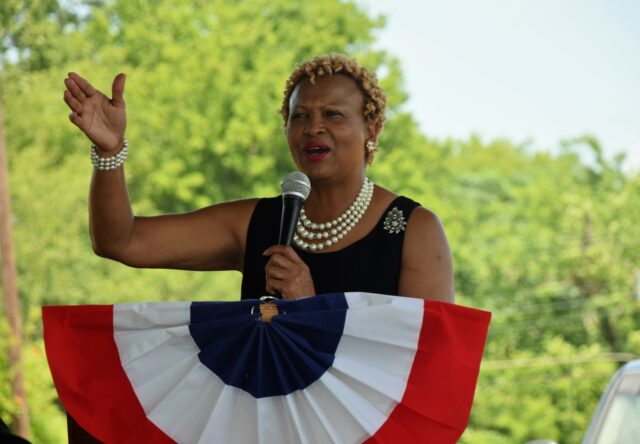 CROCKETT – A day of festivities and revelry was held this past Wednesday in Crockett as area residents gathered for the 34th Annual Juneteenth Celebration. This year’s theme was “Building Bridges” and the Grand Marshall was for the event was Crockett Mayor Dr. Ianthia Fisher.

Juneteenth commemorates African American freedom and emphasizes education and achievement. It is a day, a week, and in some areas a month marked with celebrations, guest speakers, picnics and family gatherings. June 19, 1865 marks the day word of the Emancipation Proclamation finally reached the state of Texas. It was close to two and a half years after the U.S. abolishment of slavery in 1863, when Union Gen. Gordon Granger read the Emancipation Proclamation from a balcony in Galveston and African Americans in Texas were finally freed. Since then, the date has become an international day of celebration and was officially declared a state holiday in 1980.

Once the parade reached its destination at the Groves Center, the formal ceremonies began. The mayor and Ms. Linda Warfield, who both helped coordinate the event, welcomed all of those in attendance and requested Rev. Tommy Love to come forward to lead the invocation.

After the invocation and pledges to the US and Texas flags, the crowd came together as one to sing the song “Lift Every Voice and Sing.” The song contains a very appropriate verse for the day’s festivities which says, “We have come over a way that with tears have been watered, we have come treading our path through the blood of the slaughtered, out from the gloomy past, till now we stand at last where the white gleam of our bright star is cast.” 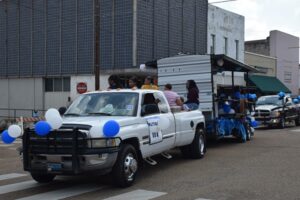 Upon the conclusion of the song, Houston County Attorney Daphne Session provided greetings from the county.

“It is wonderful – once again – to make it to the Juneteenth parade and program and to be able to celebrate Juneteenth in the community. I am so glad everyone is here. I am glad you are participating. I’m glad you’re acknowledging the emancipation of our ancestors. Thank you for being here,” Session said.

Next up, Crockett Police Chief Clayton Smith provided greetings from the city of Crockett.

The police chief was followed by Rusk City Councilman Walter Session who provided reflections on the origins of Juneteenth and what it meant to him.

AS the program continued, Billy “Hollywood” Groves introduced his sister – Dr. Fisher – as the parade grand marshal, mayor of the city of Crockett, GM of the Groves Standard Newspaper and keynote speaker.

“What I would like to do is say a great, big thank you. No matter how well we plan things and put them together, it only comes to fruition through God’s will. I was so privileged to at the right place at the right time. God helped direct some truly wonderful people who helped work on my campaign. It was such a special time and it wasn’t even about me. They worked with God and the community at the same time. I was truly inspired by that,” the mayor said.

As the mayor continued, she asserted that throughout her campaign for the mayoral position, she had dealt with many people and said the same person they saw on the campaign trail

is the same person who would lead the city as mayor.

“One thing we do understand is that we are a community,” Fisher said. “One thing that really reinforces that we are a community is that when someone hurts or experiences a tragedy, we come together so tightly. There is nothing that doesn’t get done for the person going through that tragedy. What that tells me is that we have heart. We just need to learn to understand that that heart doesn’t just apply to one situation. It is who you are and that is the way you ought to be living.”

She continued, “My goal for the city of Crockett – I think we should be there for each other all the time. We shouldn’t have to wait for a crisis to reach out. We should be supportive of each other at all times.”

The mayor also read a proclamation from the City of Crockett declaring June 19 as Juneteenth Day. The proclamation read, in part, “And whereas, Juneteenth today celebrates African-American freedom while encouraging self-development and respect for all cultures as it takes on a more national and even global perspective, the events of 1865 in Texas are not forgotten for all of the roots tie back to this fertile soil from which a national day of pride is growing. And whereas, the 19th day of June, commonly called Juneteenth, became a statewide holiday in Jan. 1980 through the efforts of Al Edwards, an African American state legislator. Rep. Edwards has since actively sought to spread the observance of Juneteenth all across America. Now therefore, I, Ianthia Fisher, mayor of the city of Crockett, by virtue of the legal authority vested in me, do by officially proclaim the day of June 19, 2019 as Juneteenth Day.”

After the proclamation was read, the introductions of the “Women of Wisdom” and the various Juneteenth pageant contestants began.

Once all the introductions had been made, the benediction was provided by Rev. Harry Fred Scott. The ceremony concluded with the audience joining hands and singing, “We Shall Overcome.”