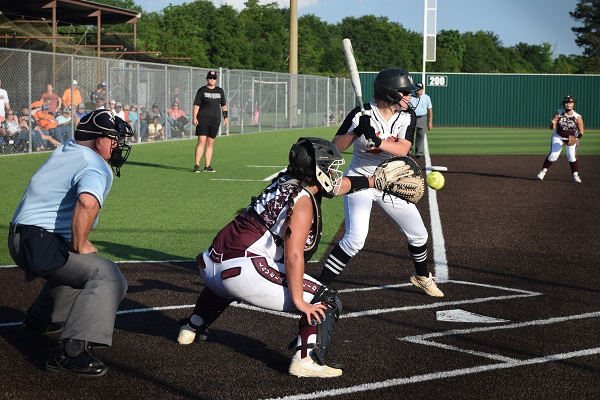 HUDSON – That’s a tough one to swallow. The Lovelady Lady Lions spectacular season came to an end in dramatic fashion on Friday, May 24 as West Sabine Lady Tiger Haley Primrose belted a 0-2 pitch over the right-centerfield wall to give the Lady Tigers a 2-1 win.

The homer not only won the game for West Sabine, it also gave them the best-of-three series by a 2-0 margin.

The Lady Lions, however, had their chances to extend the series. Unfortunately, the Lovelady girls couldn’t take advantage of their Game 2 opportunities when they arose.

Following a not so great performance in Game 1 of the series, Lovelady bounced back and appeared to have regained the form which carried them five rounds deep in the postseason.

The Lady Lions’ set the tone of the game

early on and showed the Lady Tigers they weren’t going to go away without a fight.

Lovelady’s Jacy Stubblefield led off the game with a double to left and moved to third on a sacrifice from Makayla White.

Linda Martinez was up next and roped a shot into right field, driving in Stubblefield with the Lady Lions’ first run of the series.

Mimi Sandoval followed in the batting order and flew out to left while West Sabine’s Hannah Spring caught Amber Mikes swinging at strike three to end the Lovelady threat.

Sandoval was in the pitcher’s circle for Lovelady and she made quick work of the Lady Tigers’ batting order in the bottom of the first. She caught Harlee Franklin looking, got Kaleigh Anderson to chase a pitch out of the strike zone for strike three and then blew a fastball by Primrose to strike out the side.

The second inning was dominated by pitching. First, Spring got Erin Sample to line out to short, struck out Rylee Biedrzycki and then coaxed Bailee Albinus to fly out to left field. Then, Sandoval got both Halli Hall and Emma Frick to pop out to short while Spring grounded into a 1-3 force to send the game into the third inning.

In the third, Lovelady’s Macie LaRue led off with a single to left and moved to second on a sacrifice from Stubblefield. That was as far as she would get, however, as White popped out to short and Martinez flew out to right.

When the Lady Tigers came in from the field, they tied the game at one. Anna Metcalf led off for West Sabine and flew out to center. Riley Lane was up next but struck out on a 2-2 pitch.

Susan Muncrief followed Lane in the order and was hit by a pitch that got away from Sandoval. That brought Franklin to the plate and she tripled into left to drive in Muncrief with the tying run. After that, Sandoval struck out Anderson to end the inning.

With the score now 1-1, Lovelady tried to recapture the lead when they came to bat in the fourth. Sandoval hit a shot to third where Primrose made a spectacular catch to rob her of an extra base hit.

Mikes followed with a liner into center but couldn’t go anywhere when Sample popped up to third. She did, however, move to second when Biedrzycki singled up the middle, but Mikes was stranded at the bag when Albinus fouled out to the West Sabine catcher.

Sandoval was back to her dominating form in the bottom of fourth as she kept the Lady Tigers off the base paths. She got Primrose to pop up to third, rang up Hall on a called third strike and then forced Frick to hit a soft liner back to the mound for the third out.

As the fifth inning got underway, it appeared as if the Lady Lions might recapture the lead with a two-out rally. Both LaRue and Stubblefield popped up to third for a pair of quick outs. White, however, drew a walk and moved to second when Martinez hit a bullet which was mishandled for an error.

A walk to Sandoval loaded the bases but just when it seemed the Lady Lions were poised to regain the lead, Mikes just barely mistimed her swing and flew out to deep left.

The missed opportunity didn’t seem to faze Sandoval and she retired the Lady Tigers’ in order to send the game into the sixth inning.

West Sabine made a pitching change to start the sixth as Primrose came on in relief of Spring and had a fairly easy inning. Sample popped up while both Biedrzycki and Albinus struck out to end the Lovelady half of the sixth.

Sandoval was equally as effective as she Muncrief to fly out and then struck out Franklin as well as Anderson to send the game into the seventh.

When Primrose returned to circle to open the final inning of play, she was dominant. She LaRue on a swinging strike out, caught Stubblefield looking at a 3-2 pitch for the second out and then got White to swing at three straight pitches for out number three.

West Sabine sent Primrose to the plate to lead off the bottom of the seventh. She looked as strike one whizzed by and then fouled off a pitch for strike two.

On the third pitch of her at-bat, Primrose timed it perfectly and blasted a Sandoval fast ball over the wall in right-center field to give the Lady Tigers the 2-1 win in walk-off fashion. The win also advanced West Sabine to the State Semifinals where they will face the Crawford Lady Pirates.

While it certainly wasn’t the way Lovelady wanted its season to end, the Lady Lions should be applauded for a job well done. We, at The Messenger Sports, would like to congratulate you on this momentous feat and look forward to next season.