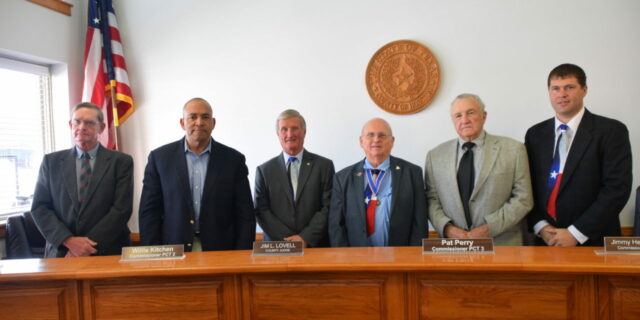 HOUSTON COUNTY – During the April 9 meeting of the Houston County Commissioners Court, Clayton Starr Clayton Starr, President of the Athens Chapter of the Sons of the Republic of Texas, addressed the court and read the first part of a document proclaiming April 21 as San Jacinto Day.

“The Battle of San Jacinto commenced at 4:30 p.m. on the afternoon of April 21, 1836 in what is presently Harris County, Texas and was the decisive battle of the Texas War of Independence,” he said.

“Led by General Sam Houston, marching into battle to the tune of ‘Will You Come with Me to the Bower’ and shouts of ‘Remember the Alamo’ and ‘Remember Goliad,’ the Texians engaged and defeated Mexican dictator General Antonio Lopez de Santa Anna’s forces in a battle that lasted only 18 minutes. This victory assured and resulted in an independent Republic which nine years later became the 26th state in the United States of America,” Starr said.

The proclamation was unanimously adopted.

Prior to the proclamation, Tony Oliva – the project manager involved with air conditioning repair at the Houston County Courthouse – reported the courthouse would need to be closed on Thursday afternoon beginning at 4 pm.

Oliva said the courthouse would be open for business on Friday and the building should have air conditioning in approximately 12 days.