HOUSTON COUNTY – Complaints of an18-wheeler driving erratically resulted in the arrest of a Louisiana woman on drug possession charges on Wednesday, June 27.

According to an affidavit of probable cause, a complaint was called into HCSO dispatch concerning a “… red 18-wheeler pulling a flatbed trailer hauling lumber that was driving at high rates of speed and had ran two vehicles off the roadway on State Highway 7 East.”

Law enforcement officials caught up to the truck near Austonio on State Highway 21 West and followed it for several miles before initiating contact.

The driver, according to the affidavit, was asked to provide his license and registration. He was also asked about his erratic driving.

“(The driver) admitted to being on Hwy. 7 East and stated he almost struck two pickup trucks as the lanes changed from two lanes down to one and he believed he had the right-of-way, which is undetermined at this time,” the report stated.

The deputies also spoke to the complainant who had arrived near the site of the traffic stop. The complainant informed the HCSO deputies “… he observed the 18-wheeler run a black truck completely off the road on Hwy. 7 and almost hit him.”

The complainant further reported he followed the truck through Crockett and onto State Hwy 21 West where the driver increased his speed significantly.

As the investigation unfolded, the HCSO deputies knocked on the truck’s passenger side door and spoke with Sanders. While speaking with Sanders, the deputies indicated – in the affidavit – they could smell the scent of burnt marijuana.

The driver gave his consent for the truck to be searched and as the HCSO deputies began the search, they discovered a marijuana cigarette and a container embossed with scenes from the movie “Toy Story.”

Inside the container were four tablets of Xanax and one tablet of hydrocodone. Both Sanders and the driver admitted joint ownership of the marijuana, while Sanders admitted to owning the Xanax and hydrocodone.

Sanders was placed under arrest and taken to the Houston County Jail where she was booked into custody on three counts of possession. The outcome of the interaction between the driver and the HCSO deputies is unknown at this time.

Bond was set at a total amount of $11,500. The bond was posted and Sanders was released pending legal proceedings. 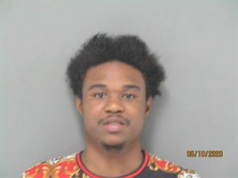