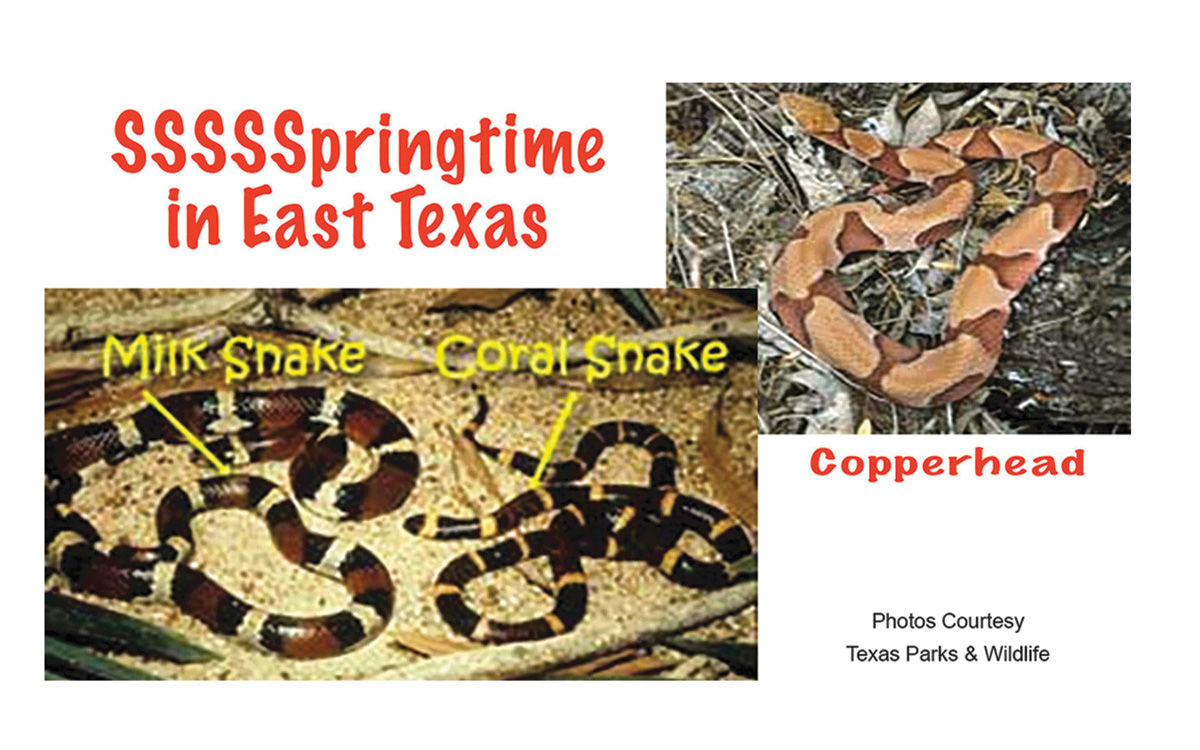 EAST TEXAS – Spring has sprung, and many East Texans are venturing out for outdoor recreational activities or to tidy up yards and flowerbeds.

As Anderson County Agrilife Extension Agent Truman Lamb pointed out, the East Texas area is home to a variety of snakes – both venomous and nonvenomous – which are also getting out and about as the spring season gets underway.

“As we look at the venomous snakes for our area, we’ve certainly got the copperhead,” Lamb said. “That’s one that’s very plentiful throughout our area.

“They’re kind of a mean snake,” he explained. “They’ll get you before you know what’s going on.”

According to Lamb, copperheads are typically found in flowerbeds or locations in which leaves and pine straw are in abundant supply.

Other venomous species in East Texas include the timber rattler, the pigmy rattlesnake, the water moccasin and the Texas coral snake.

“We don’t see them real often,” Lamb said of the coral snake. “But they could be in your lawn; they could be out in the wild. Often, I see them crossing county roads.”

While rattlesnakes seldom venture into lawns, Lamb said East Texas residents are encouraged to keep their yards tidy in order to lessen the chance of attracting the unwanted guests.

“In order to help keep any of the snakes down, we certainly need to keep the lawn mowed,” he said. “If you live close to an area where there’s a lot of brush and wooded area, you’re probably going to have more snakes, because that’s the ideal habitat for them.

“The water moccasin, of course, is generally going to be around water, but not always,” Lamb continued. “Sometimes, they’re on dry land, but close to water.”

“There are snakes that resemble the coral snake – it’s a milk snake,” said Lamb. “The difference is in the band. Red and yellow kill a fellow.”

Both the coral snake and the milk snake are red, yellow and black in color; however, the nonvenomous milk snake’s pattern consists of alternating bands of red, black and yellow or white, black and red.

“There’s several different variations of milk snakes,” Lamb explained. “There’s a Mexican milk snake that we see, and then, the deeper east that we go toward the Louisiana line, there’s a Louisiana milk snake as well.

Other nonvenomous species in East Texas include rat snakes – such as the Great Plains rat snake and Texas rat snake – and king snakes.

“They’re one that we probably should leave alone,” Lamb said. “They are beneficial snakes, because they help keep down the population of rodents and things like that.”

In addition to rats, rat snakes consume frogs and insects.

Green garter snakes are another nonvenomous species which is plentiful throughout the East Texas area.

“There are a number of different kinds of water snakes, and a lot of people will mistake those for moccasins,” Lamb added. “Of course, they’re not harmful at all.”

One such species is the diamondback water snake.

“It has that pattern of a diamondback – kind of like a rattlesnake – but he’s a water snake, and he is not poisonous,” Lamb said. “There’s also a yellow-bellied water snake, and as the name refers, his stomach is yellow.”

The blotched water snake, Lamb said, also bears a striking resemblance to the venomous moccasin. This species, however, is not commonly seen in the East Texas area.

“The coachwhip will make you hurt yourself,” Lamb cautioned. “If he sees you – they’ll often chase you. But as far as being poisonous, no.”

The venomous copperhead also has its own alarming doppelganger in the form of the Eastern hognose snake.

“What happens with that snake – you come up on him, and he will coil that tail, and also, his head and neck will swell and make you think you’re looking at a cobra,” Lamb divulged. “That’s one that would probably make you hurt yourself as well, because of the way he acts.”

Hognose snakes, Lamb said, often make their way into yards and other locations around homes.

As Lamb pointed out, even nonvenomous species pose a risk due to the bacteria they present.

“That can be pretty bad, too. It depends on a person’s immune system,” Lamb explained. “I always suggest to people that if they get bit by a nonpoisonous snake, they really should go seek medical attention because of the bacteria.”

According to statistics provided by the Texas Department of State Health Services, approximately 7,000 bites from venomous snakes are reported annually throughout the United States. Of these incidents, one out of every 500 – only 0.2 percent – results in a fatality. The statistics further indicate that an average of one to two Texas residents die from a venomous snakebite per year.

Among all bites received from venomous snakes, roughly half are “dry bites,” meaning that no venom is actually injected into the victim by the snake.

Due to biological and environmental factors regarding the toxicity and quantity of a given snake’s venom – as well as the fact that the immunological response to snake venom varies from person to person – pinpointing a standard set of snakebite symptoms is difficult.

Commonly reported symptoms, however, consist of ailments such as blurred vision, dizziness, excessive salivation or sweating, nausea and vomiting and numbness and tingling. Fang marks may be visible in the area of the bite, and the victim may experience localized pain or burning sensation, as well as swelling.

Seeking prompt medical attention is vital following a venomous snakebite. The Texas Poison Center Network (1-800-222-1222) or 911 should be contacted for information regarding which medical center in the victim’s local area is able to provide the appropriate antivenin. If possible, a call should be made in advance to the medical center so that staff are able to have the antivenin ready when the victim arrives.

Killing the offending snake and bringing it to the emergency room is appropriate in the event that it can be done without risk of further injury. Those who choose to bring in the snake should exercise extreme caution, as reflexes may still allow the dead snake to bite.

If the snake cannot be killed without risk of further bites or injury taking place, taking a digital photo or writing down a detailed description of the snake’s appearance should be done in order to aid physicians in determining which antivenin should be used.

The bite victim should be safely distanced from the snake, and any jewelry or tight clothing should be removed from the victim prior to any swelling. The bitten limb should be lifted to a level equal to that of the heart; higher elevation could cause a faster distribution of venom throughout the remainder of the body, while holding the limb lower than the heart could cause increased swelling.

Movement of the bitten limb should be limited, and transportation should be brought to the victim whenever possible. If available, soap and water should be used to gently cleanse the bite wound, and the victim should be kept calm.

Attempts should never be made to suck venom from the bite wound. Do not make cuts over the snakebite, as this poses the risk for increased tissue damage. Constricting devices such as tourniquets should not be applied to the bitten limb, as well as ice or cold packs. The victim should refrain from taking any pain relievers or other medications unless told to do so by a physician. 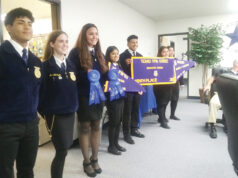