GRAPELAND – As the district opener approaches, the Grapeland Sandies are honing their skills in preparation for defense of their eight consecutive District Championships. With that in mind, the Sandies welcomed the Class 4A Fairfield Eagles in Grapeland for a tune-up before start of district play.

The Sandies were a little out of sorts as the contest got underway and only managed eight points in the opening quarter. Rick Frauenberger had four, Deco Bryant knocked down a three, and Josh “Bear” Ackley converted a free throw to round out the Grapeland first quarter point production.

The Eagles took advantage of the slow start by Grapeland to end the quarter up by four, 12-8. Kolby Adams hit a pair of shots from behind the arc, Jaise Oliver added four and KD Oliver dropped in two to account for the Fairfield first quarter scoring.

While the Sandies seemed to be sleep walking through the first eight minutes of play – once the second quarter began – it was full speed ahead for Grapeland. The Sandies scored 31 points in the second period while they limited the Eagles to 13.

Grapeland was led by Deco Bryant with four three-pointers for 12 second period points. Bryant was joined in the scoring column by Javion Joseph with six, Frauenberger with five, Keizion Ashford with four, Ackley with three and Brayden Cheatham with one.

The Eagles second quarter scoring came from Oliver with five, Walker with four and both Adams along with JoQuan Freeman with two, which made the halftime score 39-25, in favor of Grapeland.

When the two teams returned to the court, the Eagles began to chip away at the Sandies’ lead. Trailing by 14 at the start of the third quarter, the Eagles managed to shave off four points by the end of the period.

The Sandies got seven points and high energy from Joseph as he led Grapeland with seven points in the third. Tyrin Wiley dropped in five from the field and Frauenberger added three. As an added bonus, Bryant drained his sixth three of the game to make the score 57-47 with eight minutes left in the game.

Fairfield’s third quarter points came from Walker with 10, Adams with seven, Kolbe Branch with a three and Jordon Gibson with two.

As the fourth quarter began, the Eagles mounted a furious comeback in an attempt to overcome the 10 point deficit.

With 4:46 left, Fairfield had cut the lead to 60-55 and just over two minutes later, the Eagles were within two.

The Sandies received a huge boost when Frauenberger wandered out from under the goal and drained a three at the 2:20 mark to put Grapeland up 65-60.

Grapeland dropped in another two, but that was when Fairfield rallied to cut the score to 67-65. A pair of free throws pushed the lead to four, but a three from Fairfield’s Branch cut the lead to 69-68, but it was too little, too late as the buzzer sounded to give the Sandies the one-point win.

For the game, Grapeland was led by four players in double figures. Deco Bryant led the way with 18 points. Rick Frauenberger had 15, Javion Joseph had 14 and Tyrin Wiley had 13.

Other Sandies in the scoring column were Josh Ackley and Keizion Ashford with four along with Brayden Cheatham with one.

The Eagles were led by Kolby Adams, with a game-high 19 points. KD Walker dropped in 18 and Jaise Oliver went for 14. Other Eagles to score included: Kolbe Branch with nine; Chad Rushin with four; JoQuan Freeman with two; and Jordon Gibson, also with two.

“That’s a Class 4A playoff team right there,” Coach Cannon Earp said, after the game.

On the huge second quarter from the Sandies, Earp said “… that was as good as it gets. We’re not going to win a ton of half-court games. That was the way we have to play – creating turnovers and scoring in transition.”

The Sandies were scheduled to play the Normangee Panthers on Tuesday, however the final score was unavailable as of press time. Grapeland opens district play on Friday, Jan. 12 against the Lovelady Lions in Lovelady. 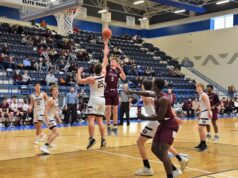