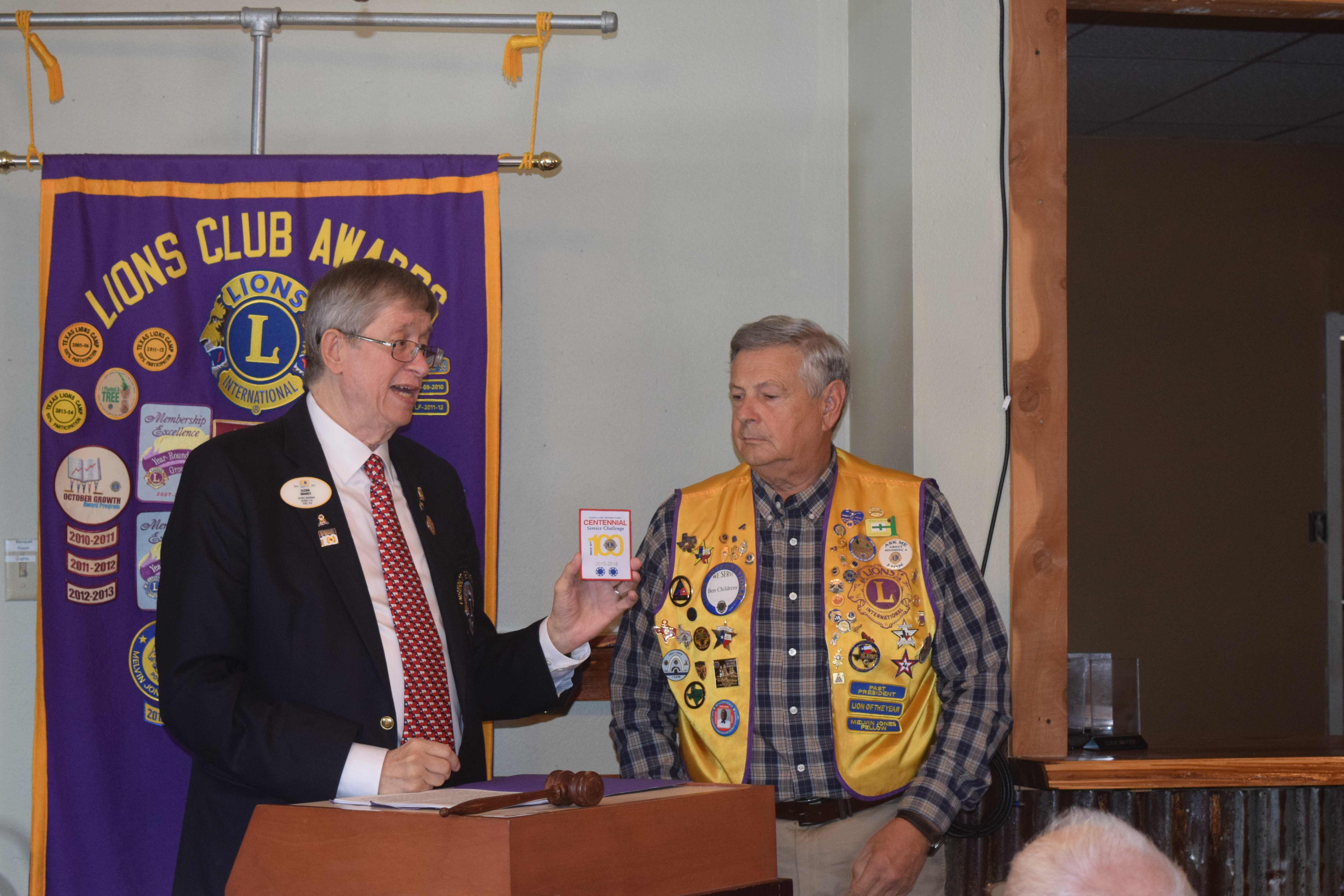 The Grapeland Noon Lions Club welcomed the DG after the meeting was opened by Club President Ben Childress who greeted the members and guests in attendance. After the guests had been introduced, President Childress asked Secretary Martha Childress to read the minutes from the previous meeting and requested Treasurer Velda Parker to provide an update on the club’s financial status.

Once the reports had been received and approved, President Childress initiated a discussion on business matters previously brought forward by the club. He presented Lion Donna Sprinkle with a recently finished sign for the CR8 center. Sprinkle expressed her appreciation for the club’s efforts and also thanked Terry Howard for painting and designing the signage.

Childress also mentioned he had recently spoken with the Grapeland Senior Center about replacing the water fountain and reported the fountain had been ordered but had not yet been delivered.

As the meeting continued, Lion Mike Goolsby was asked to provide an update on the Peanut Festival. He said the planning was coming along well and added the food booths had already sold out. Goolsby also said he would like to see the club stay with the roasted corn and ribbon fries it sold last year. He went on to say the festival was scheduled for Oct. 17 and the theme selected for this year was “Love, Peace and Peanuts.”

Other matters addressed by Childress included a request from Vulcraft to cook once again for their annual picnic the day after the Peanut Festival closes.

Before the District Governor addressed the club, Crockett Lions Club President (and Precinct One Justice of the Peace) Clyde Black spoke to the Grapeland club and asked if any members would be interested in helping the Crockett club with a golf tournament on Oct. 13. No action was taken on the matter and it will be discussed at a future meeting.

Following Judge Black’s request, Childress introduced DG Brandt who received a warm round of applause from the Grapeland Lions.

“This is a very special year I stepped into by accident. This is the 100th year of Lionism. That’s quite an achievement. Consider all of the things we have done over the years as the Lions Club,” he said.

“We are going to celebrating that 100th year in Dallas, Texas in October of 2107 and there will be a centennial celebration for the Lions Clubs of Texas,” the DG added.

As he continued, Brandt said he brought greetings from LCI President Corlew and indicated said his motto for the coming year was “New Mountains to Climb.”

Brandt said the LCI President wanted to stress three ideals this year. “They are: service, leadership and membership. The membership part, especially in the United States. The membership in the Lions has been steadily declining over the last 30 years. We have to turn that thing around.”

Also on President Corlew’s agenda for the coming year were three additional items. The DG explained with the events going on in the world, Corlew wanted to the various Lions Clubs to “… nurture peace, curb the violence in our own community as best we can and try and bring harmony to our communities and the world, as best we can.”

The potential to accomplish those three items was evidenced by events at the end of WWII, Brandt explained. He cited how Lions Club leaders from around the world came together in 1945 to petition the U.S. government to allow the organization to spread its message of service and harmony around the globe. Brandt indicated, however, the task was made more difficult by structural entities within the government which created roadblocks for the Lions.

According to the District Governor, after the first 1945 meetings, the roadblocks began to disappear and explained, “… that was the start of the United Nations. That’s what came out of the initial meeting the Lions started. We are the only non-governmental unit – as Lions – that serves in the United Nations. We are also the only service organization allowed into the country of China because of the great work that we do around the world. We do great things and we do have impacts on governments.”

Before he concluded, Brandt took time to present an award to the Grapeland Club for its efforts in the Centennial Service Challenge by planning an event/action geared towards youth, hunger, vision or environmental service. Brandt said the Grapeland Lions had achieved two of the four in sight and youth service.