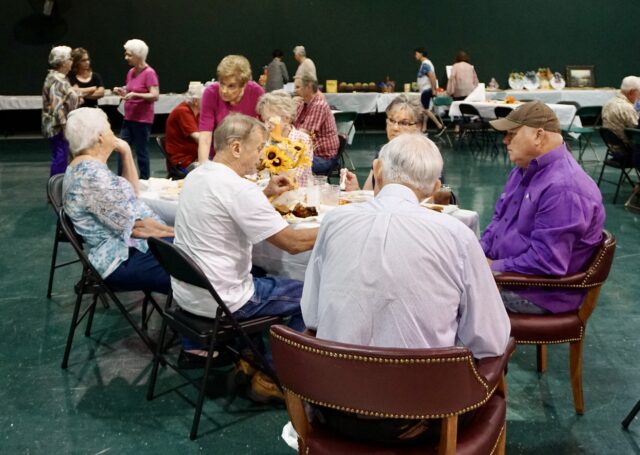 CROCKETT – Many Crockett residents held a fundraising luncheon to help local man Gaylon Cook who was recently injured working in the oil industry.

The barbecue lunch was held at the Good Shepherd Church in Crockett Friday, Sept. 16.

Guests were encouraged to participate in the silent auction and bake sales.

52-year-old Cook was working in the oil-field when the life changing accident occurred.

“We were hooking everything up for a hydro test,” Cook said. “One of the pumpers opened one of the valves and hit me with H2S (hydrogen sulfide). They had to life-flight me to a hospital in San Antonio. My nerves are messed up along with the left side of my brain. I have muscle spasms. It’s hard.”

“They say when you get that gas inside of you, you usually do not even make it to the hospital,” Rhone explained. “But he is back now, still with a lot of problems with his legs and with walking. He never in a million years thought he would have to be the one to ask others for help.”

Cook said it was hard to accept that so many people wanted to come and help him get through this hard time.

“It’s an experience I can’t explain,” Cook said. “I always wanted to help everybody else and it was hard to let someone else help me. I don’t even have the words for it. I just appreciate it so much.”

The good people who came to support Gaylon Cook quietly and happily did a lot to help out a neighbor in need.