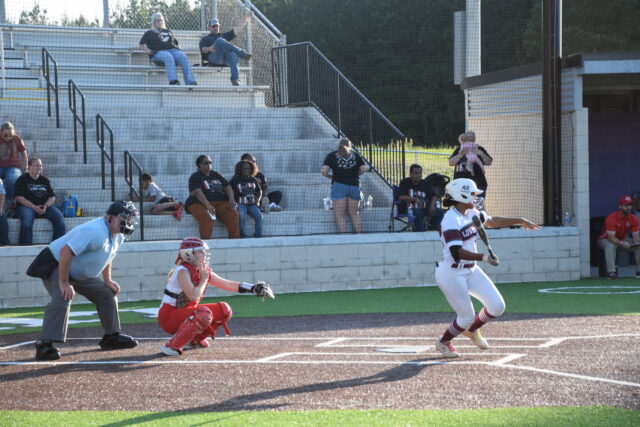 LUFKIN – The Lovelady Lady Lions are on a mission this postseason. They made it to the Regional Semifinals last year before falling to West Sabine, 2-1 and 6-5.

This year, they were ranked #1 in Class 2A for most of the season before a late season loss in a warm-up game to Franklin (ranked #5 in Class 3A). The loss dropped the Lady Lions to #5 in the TGCA polls.

Since that April 2 loss, however, Lovelady has given up a grand total of seven runs while scoring 94. That trend continued in the Area Round this past weekend as the Lady Lions destroyed the Colmesneil Lady Bulldogs in a best-of-three series to capture the Area Championship.

Macie LaRue pitched both games for Lovelady and gave up a total of four hits combined. Meanwhile, the Lady Lions pounded out 12 hits in Game One and 13 hits in Game Two.

Mihyia Davis led off the first game with a triple and two pitches later, she scored on a passed ball to stake the Lovelady squad to a 1-0 lead in the first.

After a quiet second, Davis was at it again in the third. She beat out a shot to short for an infield single and then stole second. The speedster then stole third and when the Lady Bulldogs made an error on the throw, she scampered home to put Lovelady ahead 2-0.

LaRue was simply dominant from the circle as she retired the first nine batters she faced and only allowed one ball to leave the infield and that was a pop fly to left that was caught for an easy out.

In the fourth, the Lady Lions bats caught fire. Following a Riley Biedrzycki pop up to short, Lovelady played a little small ball as Bailee Albinus bunted her way aboard. She stole second and when LaRue singled down the line in right, Albinus raced home.

Kinzie Seale followed with a bunt single as LaRue motored in to third on the throw. Shyanne Pipkin also bunted and beat the throw to first as LaRue scampered home to make the score 4-0. That brought Davis up once again and she slapped a grounder up the middle.

The ball was misplayed in the outfield and rolled all the way to the fence. That was all Davis needed as she chased Seale and Pipkin around the bases and crossed the plate to make the score 7-0.

The Lady Lions revved up their offense again in the top of the sixth. With two outs, Davis singled and stole second. She came around to score on Scout Lovell’s double and Lovell moved over to third on a passed ball with Linda Martinez at the plate.

Martinez singled through the middle of the infield to drive in Lovell and bring Haven Prager to the plate. Prager had been swinging a hot bat lately and on a 2-2 pitch, she launched a blast over the left field fence for a two-run tater, making the score 11-0.

That was all the Lady Lions would need as LaRue retired the side in order in the bottom of the sixth causing the game to be called due to the 10-run mercy rule.

Game two was played Saturday as the two teams met up again in Lufkin. Unfortunately for the Lady Bulldogs, the outcome wasn’t any better.

In fact, it was very similar to game one. LaRue dominated from the pitcher’s circle, Davis was a beast on the base paths and Prager homered as the Lady Lions rolled to a 10-0 win to capture the Area Championship.

The win moved Lovelady into the Regional Quarterfinals where they are scheduled to face the Beckville Lady Cats in a best-of-three series.