GRAPELAND – This is when the games get fun. Two cross-county rivals battling it out for first place in district – it doesn’t get much better than this.

Such was the case on Friday night as the Lovelady Lions made the 30-minute trek to take on their longtime rivals, the Grapeland Sandies. Both teams came into the contest undefeated in District 20-2A and while there is still a lot of basketball to be played, the winner would have the inside track for the district championship and a number one seed heading into the playoffs.

The last time the Lions beat the Sandies in basketball, Barack Obama was president. On Friday night of last week, however, it seemed Grapeland might be ripe for the picking. The Sandies were without two starters while another one of the starting five was struggling with an injury.

Although it seemed the planets had aligned for Lovelady, the Grapeland squad – last year’s Class 2A State Runners-Up – wasn’t about to roll over. The Sandies have won 13 consecutive district titles and after a decisive 62-34 win over the Lions last Friday, it appears they are well on their way to 14.

Or, as The Who’s Roger Daltrey once sang, “Meet the new boss, same as the old boss.”

Following the opening tip, the Grapeland defense took over the game as they limited Lovelady to a single point on a Caleb Gilchrist free throw.

The Sandies, meanwhile, saw Omarian Wiley drop in four points in the opening period while Zan Anderson, Cadarian Wiley and Kionte Willis all had two apiece. Johnny Lamb converted one of two from the line to help Grapeland take an early 11-1 lead.

Despite the deficit, the Lions’ offense began to click as the second quarter got underway. Slade Murray found his shooting touch as he poured in six points. Keivon Skinner dropped in four, Gilchrist connected on a shot from behind the arc and Dayvian Skinner also added three as Lovelady managed to keep pace with Grapeland before the horn sounded for halftime.

The Wiley brothers continued to pace the Sandies in the second quarter as Omarian knocked down six while Cadarian had four. Anderson drained a shot from downtown while Jax Vickers found the scoring column with two which helped Grapeland take a 26-17 lead into the locker room at the break.

When the two teams returned to the court, the Sandies revved up their defense to put the Lions in a major hole. Lovelady could only muster six points in the third quarter on four from Murray to go along with a free throw from Gilchrist and another from Jayton Crawford.

O. Wiley continued to torment the Lions on the offensive end of the court as he put up eight points for Grapeland in the third. Cole Goolsby found his stroke and dropped in five while Anderson added three to help the Sandies take a 42-23 lead after three periods of play were complete.

The 19-point margin was simply too much for Lovelady to overcome. K. Skinner added four to his total in the fourth while Skylar Pipkin added three. Gilchrist and Blake Patrick added two apiece to close out the Lions’ scoring in the final period of play.

Grapeland saw O. Wiley continue to torch the Lions as he added eight more to his total in the fourth. Lamb knocked down five, Nate Ivey hit a three-pointer while both Vickers and Jason DeCluette had two apiece to help the Sandies pick up the 62-34 win.

On the game, Lovelady was led in scoring by Slade Murray with 10 points. Keivon Skinner put in eight and Caleb Gilchrist went for seven. Skylar Pipkin and Dayvian Skinner both had three, Blake Patrick had two and Jayton Crawford chipped in a free throw to round out the Lions’ point production.

Other scorers for Grapeland included Cole Goolsby with five, Jax Vickers with four, Nate Ivey with three, and both Jason DeCluette and Kionte Willis with two apiece. 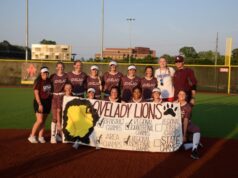 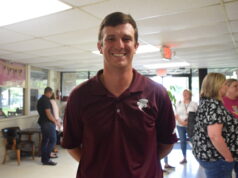 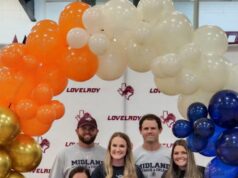