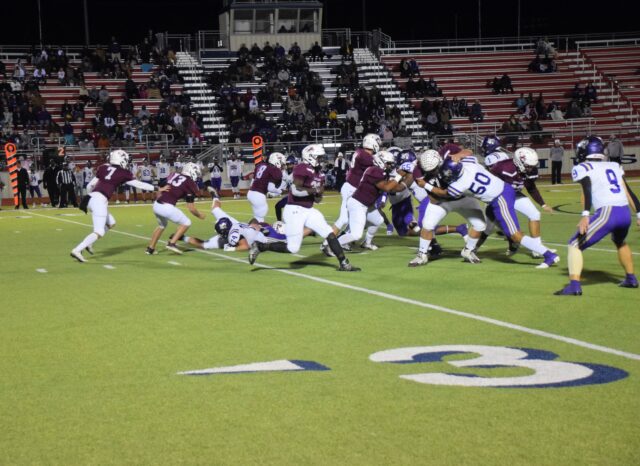 MADISONVILLE – The Lovelady Lions hit the road on Friday night as they traveled to Madisonville to take on the Mart Panthers in the Area Championship. Lovelady came into the game with a 9-2 record and head beaten Hull-Daisetta in Bi-District.

Mart entered the contest ranked #1 in the state in Class 2A and had dispatched of Clarksville in the first round of the playoffs by a score of 84-6.

The Lions and Panthers had met in the Area Round of the postseason last year, with the Panthers advancing on the strength of a 48-12 win. Mart knew the Lions would be a tough out once again and Lovelady certainly didn’t disappoint.

The Lions found themselves in a 28-0 hole at the start of the fourth quarter, but cut the Panthers’ lead to just 12 with over six minutes remaining. Unfortunately, that was as close as Lovelady would get as Mart pulled away in the last four minutes to win the game by a score of 42-16 and advance to the Regional Semifinals.

As the game got underway, Lovelady came out and popped Mart right in the mouth. Starting at their own 26, Shaun Easterling carried the ball three times in a row to move the ball to the Mart 40. On the next play however, Lovelady’s Conner Martinez was stripped of the ball and the Panthers recovered at their own 38.

Martinez more than made up for the turnover on the next two plays. On first down, Martinez threw Mart’s Klyderion Campbell for a five-yard loss and on second down Martinez blasted Panther RB Neven Hickman for a one-yard loss. On third down, Wesley Carroll was held to a three-yard gain and Mart was forced to punt.

The Lions took over at their own 31 and began a long, time-consuming drive. Easterling picked up two on first down and after Lovelady QB Slade Murray was stopped at the line of scrimmage, Easterling ripped off an 11-yard gain. Martinez added 10 more to move the Lions into Panther territory.

The running back duo continued to pick up good yardage as they moved the ball down to the Mart 26.  Murray bulled his way ahead for seven on third and five and the Lions found themselves in the Mart Red Zone. Back-to-back four-yard gains from Easterling put the Lions in a third-and-two situation. A one-yard gain set up a fourth-and-one at the 10, but an illegal procedure penalty moved the ball back to the 15.

Lovelady was held to one yard on fourth down and Mart took over at their own 15. The Panthers’ De’Traevion Medlock was thrown for a three-yard loss on first down and when Carroll threw incomplete on second down, the first quarter came to an end with the score tied, 0-0.

As the second quarter began, Mart was forced to punt and Lovelady took over at the 45. A bad snap on first down and a one-yard pickup by Murray on second, put the Lions in a hole. Murray threw deep on third down, but the Panthers had it well defensed and De. Medlock intercepted the pass at the Panthers’ 25.

From there, the Panthers finally began to generate some offense as they picked up the tempo. Hickman picked up one and then Trey Powell connected with Brandon Lundy for seven. Hickman added another two to pick up the first down but on the next play, Mart was flagged for illegal procedure.

Following a completion for no gain, Mart went back to the ground. Hickman ripped off runs of 20, 3 and 12 yards to move Mart inside Lovelady territory. Powell kept it on the next play from scrimmage and found a crease in the Lions’ defense as he took it 34 yards to the end zone for the first score of the game. Armando Chavez added the extra point and with 8:03 left in the first half Lovelady trailed 7-0.

After the kickoff, the Lions took over on their own 34. Easterling did the early work as he picked up 11 yards on three attempts before Martinez broke off a 30-yard scamper down to the Mart 25. That was as far as the Lions would get, however, as the Panthers forced a turnover on downs.

On the play, however, Murray appeared to injure his shoulder and left the game. Once play resumed, Hickman picked up 30 on a Powell pass. Powell picked up 10 but a pair of penalties moved the ball back to the 26. Faced with a third-and-20, Powell threw incomplete, but on fourth down, Powell found Lundy on a crossing route and the receiver weaved his way across the field and into the end zone for a 26-yard TD. The extra point was good and with 1:05 left in the first half, Lovelady trailed 14-0.

Lovelady had won the toss and elected to receive the opening kickoff which meant Mart would open the second half with the ball. The Panthers used this to their advantage as they marched down the field to extend their lead on a four-yard Powell TD. The extra point from Chavez made the score 21-0 with 10:34 left in the quarter.

Murray was not able to go in the second half and as a result the Lions moved Easterling to the QB position. Unfortunately, Easterling’s first series of downs behind center didn’t go well and Lovelady was forced to punt.

Mart took over at their own 40 and two minutes later, the Panthers were back in the end zone as Powell took it 21 yards for a TD with 8:13 remaining in the quarter.

To their credit, the Lions never gave up and on their next possession, Lovelady drove from their own 31 down to the Mart two before a turnover on downs gave the ball to the Panthers at their own one.

Powell was stopped for no gain on first down but connected with Dominic Medlock for five on second down which brought the third quarter to an end.

As the fourth quarter started, Powell dropped back to pass on third-and five but Martinez and Matthew McFarland broke through the line and sacked Powell in the end zone for a safety to make the score 28-2.

After the safety, Lovelady took over at their own 45. On first down, Dayvian Skinner broke loose on a 45-yard gallop but fumbled the ball as he was being tackled. Somehow, he managed to recover the ball, giving the Lions the ball at the Mart three-yard line. Easterling did the rest as he scored on the next play to make the score 28-8 with 11:10 left in the game.

The Lions attempted an onside kick, but the Panthers fell on it at their own 46. Hickman picked up 26 yards on second down and then Campbell ripped off a 25-yard gain. As he was being tackled, the Lions stripped him of the ball and recovered at their own two.

Easterling picked up one on first down while Skinner added five on second. Easterling appeared to pick up the first down but the ball was spotted just short of the line to gain setting up a fourth-and-inches.

With the ball at the 11, Lovelady Head Coach rolled the dice. Rather than punt or try and run the ball, he opted to throw. Easterling was at QB and was being chased by the Mart defenders. He was able to buy enough time to set his feet and throw downfield.

The ball was a little underthrown and it looked like the pass was going to be intercepted. The Lions’ Caleb Gilchrist, however, had different plans. He high-pointed the ball and ripped it out of the Mart defender’s hands. Landing on his feet, Gilchrist turned to the end zone and made it down to the 16.

AN unnecessary roughness penalty two plays later moved the Lions inside the Mart 10 and on first-and-goal, Easterling blasted his way into the end zone. Skinner added the two-point conversion and with 6:26 left to play, the Lions had cut the score to 28-16.

That was as close as Lovelady would get, however, as the Panthers scored a pair of late touchdowns to make the final score 42-16.

The loss ends the Lovelady season with a record of 9-3. Mart will move on to the Regional Semifinals later this week and will take on the Wortham Bulldogs later this week.