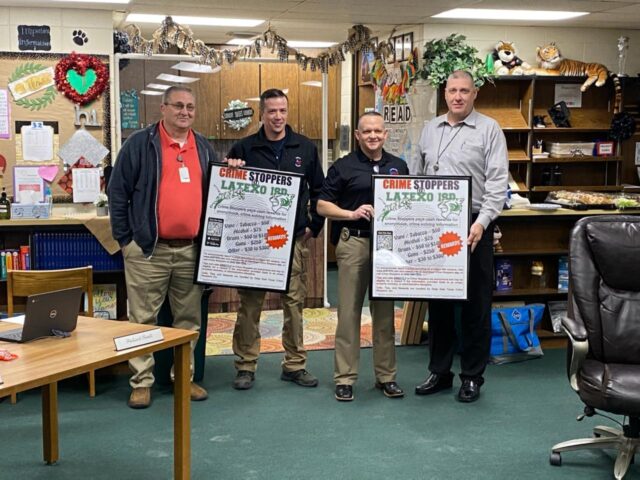 LATEXO – During the Thursday, Feb. 11 meeting of the Latexo Independent School District Board of Trustees, the board members gave the green light to implement a new program from the Deep East Texas Crime Stoppers.

According to LISD Board President Kelly Nicol, “Lufkin Police Crime Stoppers Director Detective JB Smith spoke with us Thursday night. He has been working with (LISD Superintendent) Mr. (Michael) Woodard and (Asst Principal/Dean of Students) Mr. (Mack) Dugat for a while now to get this set up. It has been a very successful program over in the Lufkin area. What we will be able to do is provide a way for students to provide anonymous tips in our school.”

Nicol explained the program is fully funded by the Crime Stoppers organization and the way they are funded is through fees assessed to criminals upon their arrest and conviction while other funding comes from fund raisers held throughout the year.

“Posters will be placed throughout the school and students will be able to click on a QR Code on the poster. They will go to a website where they will be assigned an encrypted number. They will give the tip and it goes straight to Mr. Dugat and also to the Crime Stoppers group in Angelina County. From there, the tip will be passed on to the appropriate law enforcement agency and it will be investigated. If it happens the tip is accurate and some type of action is taken, then the student gets paid,” he said.

The school board president went on to say, the problem is not in apprehending the small-time players but rather in getting to the higher-ups in the illegal substances/activities food chain.

He added, “I think this will be a really good program for our school. Mr. Woodard has been very good at going out and finding innovative ways to make our school better without costing money. He has done a very good job at that and this is a fine example of that.”

In other matters brought before the LISD board: