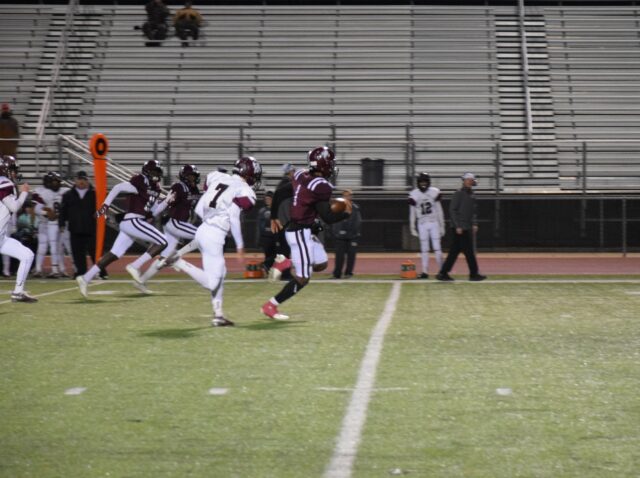 BULLARD – An easy, 63-14 win over the Frost Polar Bears in the Bi-District Round of the 2019 UIL Football Playoffs, moved the Grapeland Sandies into the Area Round against the Cumby Trojans on Friday night, Nov. 22.

The Sandies had finished the regular season as District 12-2A DII Champions with a mark of 8-2 while the Trojans had finished second in District 9-2A DII with a regular season record of 7-3. Cumby had defeated the Bowie Pirates in the Bi-District Round by a final score of 50-28 to set up the Area Championship game with Grapeland.

On paper, the game looked fairly even – but that’s why they play the game. The Sandies scored on their third play from scrimmage and never looked back as they walloped the Trojans by a final score of 54-22.

As the game got underway, Cumby won the coin toss and elected to defer to the second half. An onside kick attempt was sniffed out by Grapeland and the Sandies took possession at midfield. An illegal procedure call pushed the Sandies back five yards to their own 45.

BJ Lamb picked up two yards on first down but threw an incompletion on second. He didn’t miss on his next attempt, however. On third-and-13, Lamb drifted back to pass and hit Keizion Ashford in the middle of the field.

Ashford, who has developed into threat to go all the way any time he touches the ball, turned up field, hit the jets and galloped 53 yards to the end zone for six points. Lamb scored on the two-point conversion and with less than a minute gone by on the game clock, Grapeland led 8-0.

The Trojans’ first possession ended in disaster. A mishandled kick resulted in Grapeland’s Kaden Dupree tackling the Cumby kick returner at the Trojan four-yard-line. A facemask penalty moved the ball out to the 22, but two plays later, the Trojans put the ball on the ground and Dupree jumped on it for the Sandies.

Cadarian Wiley picked up six yards for Grapeland on first down and Cumby aided the Sandies effort by jumping offsides to give Grapeland a first down at the Trojans’ 13.

An illegal procedure penalty moved the ball back to the 18. It didn’t seem to matter, however, as Lamb kept it on first-and-15, slipped a tackle and waltzed into the end zone for an 18-yard TD. The try for two was no good, but with less than six minutes gone in the first quarter, the Sandies now led 14-0.

The Trojans’ next possession also ended with a fumble. This time it was Cooper Ward who recovered the ball at the Grapeland 42. Wiley picked up two on first down and then Ashford made a twisting, turning catch at the 23-yard line of Cumby for a first down.

On the next play from scrimmage, Lamb connected with Deco Bryant on a 23-yard scoring strike to make the score 20-0. The try for two was unsuccessful, but with 5:13 still left in the first quarter, Grapeland had extended their lead to 20-0.

The remainder of the first quarter and early part of the second saw the two teams exchange possessions as they both turned the ball over on downs. At the eight minute mark of the second quarter, however, the Sandies had the ball near midfield.

Faced with a second-and-28, Lamb bobbled the snap but recovered quickly. As he scrambled, he saw a sliver of daylight in the Trojan defense and took advantage of it – to the tune of a 42-yard scoring run. Lamb also added the two point conversion and with 7:07 left in the half, the Sandies had increased their lead to 28-0.

The Trojans finally broke into the scoring column the next time they had the ball. Starting at their own 40, Cumby drove into Grapeland territory behind the running of Cameron Scott, Colby Lindsey and Jacob Demidio.

After Demidio moved the ball down to the Sandies 15, Scott took it the rest of the way for six. He also added the try for two to bring the first half scoring to a close with Grapeland in the lead, 28-8.

The momentum seemed to have shifted sides during halftime and the Trojans took advantage of the side change. Starting the second half with possession of the ball at their own 34, Cumby’s Scott picked up 12 yards on three carries. Lindsey then bulled his way for seven to move into Grapeland territory.

Scott ripped off 23 and nine yards on back-to-back carries to move inside the Grapeland red zone. Demidio pounded the ball down to Grapeland one and from there Scott took it the rest of the way to make the score 28-14.

After the TD, Grapeland took possession on their own 49. Wiley lost three yards on first down but on second down, a pass attempt by Lamb was ruled as a lateral and Cumby recovered at the Sandies 37.

With the game still in doubt and the momentum on the Cumby side of the field, the Grapeland defense stepped up and slammed the door on any hopes the Trojans had of a comeback.

On first down, Scott threw incomplete. He picked up five on second down but was held to no gain on third down. On fourth-and-five from the Sandies’ 32, big Landon Jackson broke through the Trojans’ O-line and sacked Scott for a seven yard loss, giving Grapeland the ball at the 39.

Having staved off a potential comeback bid for the time being, the Sandies went to work putting the game away.

On first down, Lamb hooked up with Austin Driskell for 47 yards. A penalty on the tackle moved the ball to the Cumby nine. Ashford picked up eight yards on first down and after Wiley was stopped on second down, Lamb slipped into the end zone from one yard out to make the score 34-14 with three minutes left in the third quarter.

The fourth quarter started with the Sandies intercepting the Trojans. Three plays later, Grapeland was back in the end zone when Lamb took it 40 yards for his fourth rushing TD of the game. Driskell’s extra point hit the crossbar but had just enough on it to creep over and give Grapeland a 41-14 lead with 9:41 left to play.

A fumble on the Trojans’ next possession gave the ball to the Sandies at the Cumby 37. Three plays later, Ashford found the corner on a jet sweep and raced 28 yards to the end zone for his second TD of the game. Driskell’s XP attempt was good and pushed the Grapeland lead to 48-14 with 6:36 remaining.

Grapeland added a late TD on a Wiley 10-yard scamper while Keegan McCollum added a touchdown for Cumby to make the final score, 54-22.

The win gives the Sandies the Area Championship for the third consecutive year and moves them into the Regional round of the playoffs. Grapeland, ranked at #7 by the AP, will face the #2 ranked Mart Panthers in the Regionals on Friday, Nov. 29 at Fairfield High School. Kickoff is scheduled for 2 pm.