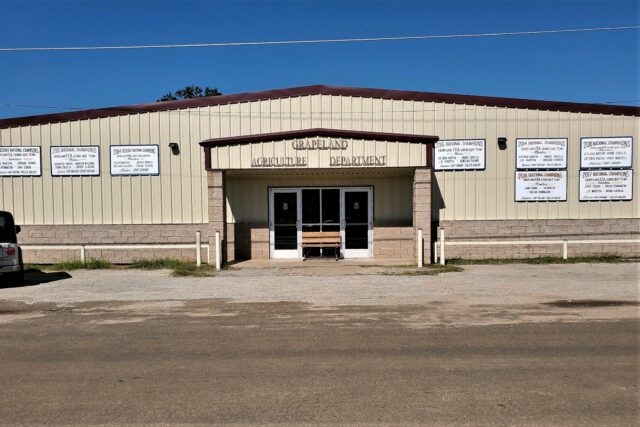 INDIANAPOLIS – The 92nd National FFA Convention and Expo kicked off this week in Indianapolis, IN. and played host to several local FFA chapters.

“Every year,” the organization’s website stated, “FFA members nationwide converge on the National FFA Convention & Expo to celebrate their accomplishments and find inspiration for their next steps. Motivational keynote speakers, energetic concerts, fulfilling workshops and a sweeping expo floor bustling with agricultural education and industry opportunities will have you snapping pics and grabbing videos of all of the experiences you’ll remember forever.”

In recent years, one of the experiences the Grapeland FFA has enjoyed is competing in and winning the National Invitational Quiz Contest.

Under the leadership of longtime Grapeland FFA Advisor Gary Graham, the Grapeland FFA Chapter had captured the Sr. Quiz title in five of the last six years, winning the title in 2018, 2017, 2015, 2014 and 2013.

Prior to the start of the convention, the quiz teams had a chance to compete at the national level and showed why Houston County may well be not only the oldest county in Texas, it may also be the smartest!

Two teams from Grapeland, two from Crockett and one from Latexo were in the competition and when the results of Oct. 29 contest were tallied, four teams from Houston County finished in the Top 20.

The Grapeland team of KeKe Harris, Madilyn McCombs, Alyssa Dilli and Cayden LeBlanc placed third overall with a combined score of 239. Harris recorded a score of 87 and McCombs notched a 77 while both Dilli and LeBlanc scored a 75.

Finishing just ahead of the defending National Champions were the FFA Chapters from Harmony, Texas and Felicity-Franklin, Ohio. Harmony claimed the title with a score of 270 while Felicity-Franklin was second with a total of 249.

The second Grapeland team at the competition – comprised of Mary Jane Watson, Cadie Belle Currie, Stacy Perez, Preslie Reynolds and Keegan Harrison – finished sixth overall, with a combined score of 199.  Watson scored a 75, Currie had a 64, Perez tallied a 60, Reynolds had a 56 and Harrison recorded a 46.

Dazed and Confused: A journey back from a stroke at 19
HCHD Drops Tax Rate, Adopts Budget
Free COVID-19 Testing at Palestine Civic Center