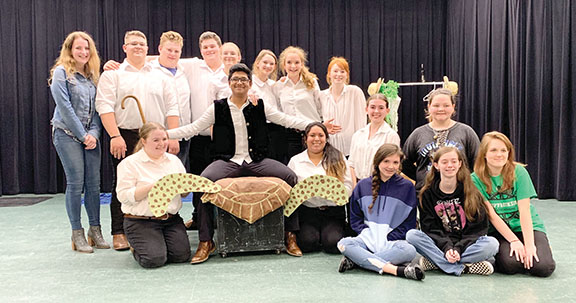 LATEXO – Latexo’s UIL One Act Play performed their Regional Finalist Play for the community on Thursday evening, April, 25. The audience was treated to an outstanding performance of Donald Margulies “Shipwrecked! The Amazing Adventures of Louis de Rougemont (as Told by Himself),” directed by Emily Carden, Angela Richey, and Kim Watson.

The evening started with desserts – prepared by the cast and crew along with their parents – and were enjoyed by all.

As the lights dimmed and the curtains opened, the cast and crew drew the audience into a fantastic tale told by Louis de Rougemont (Hasnain Asad) about the adventures he embarked upon after leaving his mother (Elena Hewett) in England.

His story told of his journey that started in England through the high seas to Australia and back again.  His “grand tale” is brought into doubt by several experts, but as the audience can attest, whether true or maybe stretched a bit, “Shipwrecked” was entertaining to all.

During their qualifying performances at District, Bi-District, Area, and ultimately as Regional finalist, Latexo received many awards including Best Actor, All Star Cast, Honorable Mention Cast, as well as Stage Crew and Tech Awards.