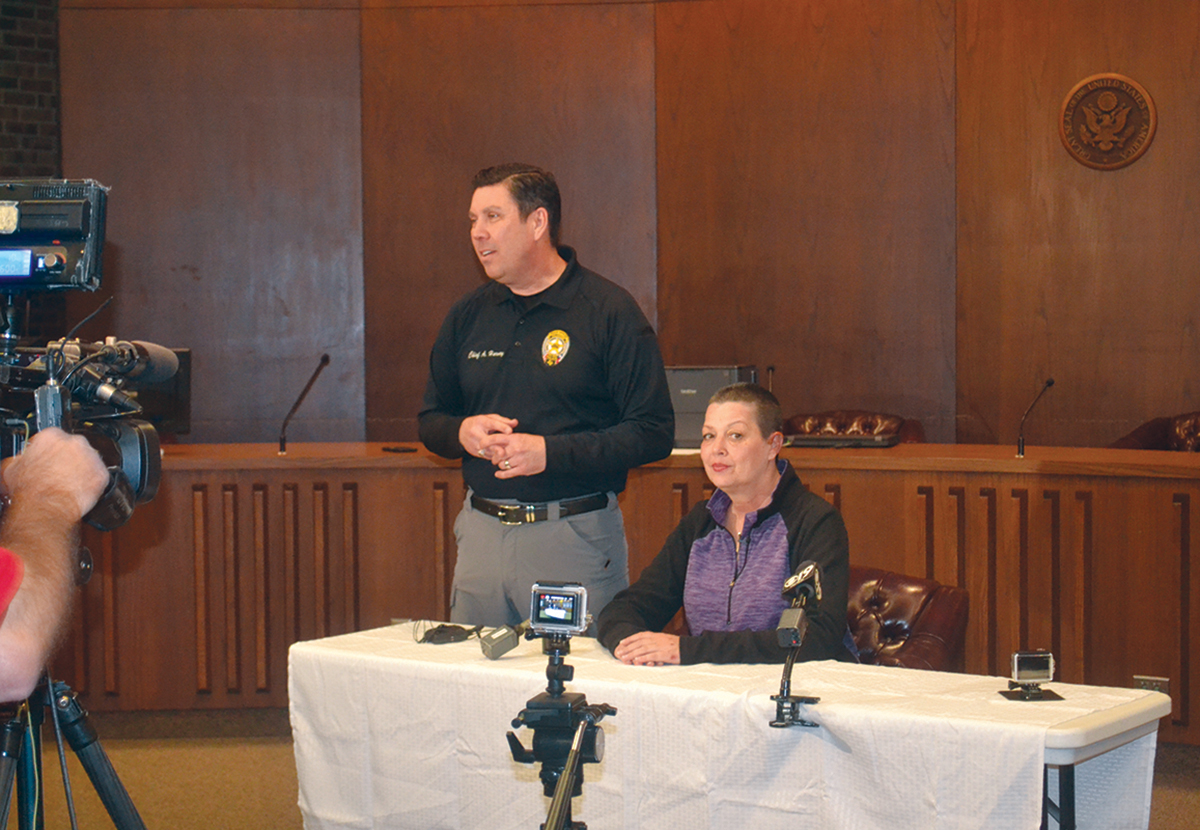 PALESTINE – A woman who was doused in lighter fluid and set aflame during a convenience store robbery in Palestine last week spoke out regarding the incident during a press conference held Tuesday, Feb. 26 at Palestine City Hall.

As Della Witt-Denizeri explained, she paid a visit Thursday, Feb. 22 to the Pitt Stop gas station located at 1221 Link St. in Palestine.

“I was stopping by to see my friend, Linda,” said Witt-Denizeri, referring to the store clerk. “She had lost her sister a couple days before that, so I was just dropping in to check on her.”

Upon her arrival at the store, the perpetrator – later identified as Robert Thompson – opened the door.

“I thought he was opening it up to let me through, and that wasn’t the case,” Witt-Denizeri said.

As a frequent visitor to the store, Witt-Denizeri said, she knew immediately upon seeing Thompson that he was not an employee, despite the fact that he implied otherwise.

“I kind of played it by ear,” she said. “I knew he didn’t work there, and I also knew that Linda was in there, so I wasn’t going to leave her.”

While trying to locate her friend’s whereabouts inside the store, Witt-Denizeri engaged in conversation with Thompson.

“I didn’t really make any conscious choice to stay or to go,” she said. “I really didn’t know what was going on even after I got in there.”

When asked how she felt to be considered a hero by the employees of the store – including the friend she was visiting that day – Witt-Denizeri was quick to deflect the attention.

“I think that Linda is a hero, and I think I thought that before any of this ever happened,” she said. “She’s a strong woman; she lives kind of far away from her family, and she’s loyal to her job and the people that she works for. I think that because of who Linda is, is the reason I stopped. If it hadn’t been Linda and she hadn’t been the way she was – already a hero – I wouldn’t have been in that situation.”

As Witt-Denizeri pointed out, being a hero is not limited to saving someone else’s life.

“It takes being kind every day,” she said. “It takes noticing the good that somebody has, as opposed to what they don’t have.”

Witt-Denizeri expressed her belief that it is possible to find something good in every person.

When asked how things took a turn for the worst, Witt-Denizeri replied, “I don’t think he (Thompson) really wanted to turn against me.

“I think he just wanted me to get out of there,” she said. “I think he saw the resolve in my face – that I wasn’t leaving – and took that opportunity to pull me in.”

Witt-Denizeri then saw the cashier bound in duct tape on the floor behind the checkout counter and realized that what she had stumbled into was a robbery in progress.

“I couldn’t get down to Linda fast enough,” she said. “I just wanted to hold her hand and let her know that somebody was there with her.”

“I could hear him walking around and doing whatever he was doing, but I had no idea,” she said.

Despite the circumstances, Witt-Denizeri said she “was never really afraid” while the incident was taking place.

“I’m a Christian, and I love the Lord, and the Holy Spirit walks with me everywhere I go,” she said. “I’m pretty sure that’s what was in control that day – of my words and my actions. I never felt any fear, and I hope that Linda didn’t feel too much once somebody else was there with her. She seemed pretty calm.”

Rather than being set on fire, Witt-Denizeri said her expectation was that she would be shot in the head.

“I didn’t anticipate a fire at all until he started throwing the fluid at us,” she said. “Actually, I wasn’t even quite sure what it was; I just started taking advantage of the situation at that moment, because the tape started loosening up.”

As a result of the lighter fluid poured on her by Thompson, the duct tape around Witt-Denizeri’s eyes began to give way, allowing her to partially see.

While Witt-Denizeri cited removing her friend from the area, she acknowledged that she first needed to extinguish the flames.

“I thought about it for a minute and realized that they had a big bucket over there that all these men come by and fill up their ice buckets with,” she divulged. “I went and grabbed a big ice bucket, opened up the ice machine, grabbed the ice and started throwing it on the fire.”

Looking back on the occurrence, Witt-Denizeri said she “brought away more than I lost that day.

When asked what she would say to Thompson if given the chance, Witt-Denizeri responded that her first action would be to hug him.

“I would tell him, ‘As far as I’m concerned, there’s nothing to forgive,’” she said. “‘But when it comes to my friend, Linda, I cannot forgive that. I won’t forgive that.’ And that’s probably something I have to talk about when I get to Heaven, but I have no doubt what would have happened if somebody had not walked in there. None.”

After setting Witt-Denizeri on fire, Thompson fled the scene in a white Chevrolet vehicle. He was apprehended at approximately 5 p.m. Thursday, Feb. 22 at JJ’s Fast Stop, located at 1200 E. Palestine Ave.

Thompson was booked into the Anderson County Jail on charges of aggravated assault with a deadly weapon and aggravated robbery. As of press time Tuesday, Feb. 26, he remained in custody with bonds totaling $4 million.

STAAR Test Rating – Did Not Meet Grade Level
Stirring the Pot of Controversy in Elkhart
“When Houston Asked for Help, Grapeland Showed Up”