CROCKETT – An army of volunteers from First United Methodist Church of Crockett made an assembly line and packed various cleaning items such as scrub brushes, dust masks, trash bags, work gloves and other supplies to fill more than 100 flood buckets on Saturday, Sept. 9. These buckets were taken to residents who live near two United Methodist Churches in the flooded areas of Orange County.

According to Crockett UMC pastor, the Rev. Malcolm Monroe, the FUMC congregation raised more than $7,000 for Hurricane Harvey relief.

More than 30 volunteers formed a “Bucket Brigrade” to pack the buckets, which included an encouraging note signed by many of the church’s members. Church members also prayed over their buckets and its future recipient.

Within 24 hours, Sabom reported all of the flood buckets from Crockett were in the hands of those who needed them most in Orange County.

“People took what they needed and left the rest for others. They know how big the need is. We saw the devastation when we were there. These were practical things that are needed immediately,” Monroe told The Messenger.

The church has a unique connection to the churches in the flooded areas. Sabom is the sister of Crockett’s pastor Monroe.

“While that area (Deweyville) is low-lying and Deweyville was destroyed by flooding last year, Mauriceville is at a higher elevation and the church there has never suffered from catastrophic flooding …until Hurricane Harvey. There was so much water that even the pews floated and were destroyed,” Monroe said in a news release.

Sabom also operated the only evacuee shelter in Orange County at the Mauriceville church for three days before being stranded in over 3 feet of water along with more than 50 evacuees, who lost practically everything in the flooding.

“The water was rising two inches an hour and it got up to three feet when they were rescued, strangely enough, by boats from Crockett. It’s so bizarre that it was my own neighbors here that rescued my sister and the people who were staying at the church for shelter. I am very thankful,” Monroe told the Messenger Monday. “My sister stayed with the evacuees until they were all rescued. Sadly, when she made it to her home, she had lost 95 percent of everything to flooding.”

On Sunday, Sept. 10, the Mauriceville church held its first service  since the flooding – even though the flood damage was still apparent.

“They still gathered. They washed and sanitized everything and had church the best they could,” Monroe said.

During times of crisis, Methodist churches in Texas provide immediate relief in the form of shelters, as the Mauriceville church did. The Methodists also supplied food and water, teams to help clean up and rebuild as well as providing the immediate response of flood buckets when disasters occur.

Crockett FUMC plans to to raise funds for more flood buckets.  The cost of each bucket is approximately $35.  Donations can be be made by calling 936-544-2044 or by stopping by Crockett First United Methodist Church at 701 Goliad St. in Crockett. 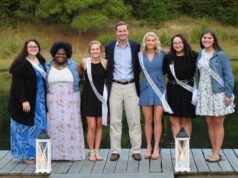 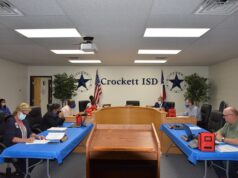